I was attracted to this novel purely by the cover (as I suppose this is meant to happen!) and it has very little about the contents on the back cover, so I took a chance.  Then I put it on a shelf where it stayed for three years until recently when again, l liked the look of it and took it down.  Pleased to say for me this was worth buying!
This is a dual time line story, but there are also differing  zones between the timelines, so I guess I's describe it as a triple time line at least.  The early part of those time lines takes place in Rome, in 1943, when the Nazi Party is clearing the Jewish Getto, and loading ill-prepared Jews onto carts, to take them to the  railway station for loading onto trucks taking them, ultimately, to their deaths.  A Roman woman, Chiara,  catches the eye of a Jewess, and holds it - why?  She will never know, but what happens next will change her entire life.  The Jewess slowly prises the fingers of her older son away from her own hand and pushes him away.  At that moment Chiara finds herself shouting "My son!  you have taken my son!" and suddenly the boy is off the cart and she has him.
What has she done?  She's 25, unmarried, with a mentally impaired sister, parents dead and only one grandparent left - and she has taken on the care of a little Jewish boy.
This story is really about Chiara.  The boy is always there between the pages, but is not a major character.  Others come and go, some stay, but Chiara is on every page, and as her life goes on, we find out more about the others mentioned.
Besides the story we are told, I found that this book is also about a love affair - a love affair with the City of Rome.  Little cobbled streets, apartments up stairways, churches, galleries - so much is mentioned that you could take the book on holiday and it would see you round the city as well as entertaining you.
Highly Recommended.
at July 21, 2020 No comments:

Well hello!  Too few posts in June, there are some family problems which have stopped me spending much time on here (and in fact I couldn't get a lot read, either!).   However, I did read last month's suggestion and loved it, so here I am with my July suggestion.
How about a
dual time story?
That's what I think might be nice, especially if UK weather goes back to sun and fun soon.  Holiday reads sometimes are chosen because they are fat and good to read by the pool, on the beach, or just relaxing on the terrace somewhere or other.  As lots of readers round the world will be staycationing  they may be re-thnking their choice of reading material.... but why would you?  So I'm still in for the dual time story, a nice big 450 pages of Louisiana, USA in both 1875 and 1987.  It's
The Book of Lost Friends - Lisa Wingate
Whatever you choose yourself, enjoy your July reading!
at July 01, 2020 No comments: 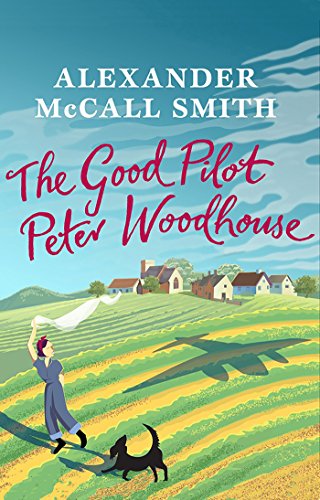 An interesting tale of life in WW2.  Pleased I read it.  Telling us what it was like to be a landgirl, an American Pilot in Europe, and a wanted man hidden in a Dutch farmhouse, all linked nicely together.  There is no awful violence here, but some wonderful pen-pictures of people.  The farmer who employs the landgirl, the landgirl who falls in love with the pilot, the pilot who is flying missions over Europe - and then there is the slow but enthusiastic lad who cannot join up but can be a farm hand, and of course, the dog Peter Wodhouse.  I like some of McCall Smith's work but not all, but I did particularly like this short and very readable little novel.
at June 16, 2020 No comments:

The joy of having a garden....


... and it is a joy, believe me.  This is an iris siberica (sorry no name) which I planted three years ago.  It has taken three years to bloom - and what a reward!  Outer petals very long and just like velvet.   I did think, this year, about digging it up and moving it, but obviously it took it's own sweet time to settle in and here's my reward.  I think I'll get ten blooms this year, and hopefully more next.
I have sibericas elsewhere in the garden; one a pale yellow and and brown, and one a blue and white mottled which might be "Flock of Butterflies".  Some, like this one, not in a border but next to a stone sink, filled with water for the birds to  bathe in.  I am widening that border sometime this year so they will  then be in the company of other plants, but they will stay next to the sink

Perhaps you thought I had disappeared into the good weather?  No, no no.... I just caught up in little jobs and long telephone conversations, and some lovely Zoom get-togethers, too!  We've had ever more lunches in the garden during lock-down in this lovely Spring weather, and I for one don't want it to go - but what I do want is rain at night (and so do the farmers!).  It's due tomorrow but it looks blue-skied and delicious outside still, so let's see shall we?
I wonder if you have any  Small Hardbacks around the place (bottom shelf of bookshelf, under the coffee table or wherever?  Because that's my suggestion to you for June.
So I am going to read a wartime romance - or that's what it says on the cover of
The Good Pilot Peter Woodhouse
by
Alexander McCall Smith
which has not been in the house very long but has such a lovely cover it called out to me to take it up for reading in the garden!  Not too hard to do that, is it?  Have a good month, and stay safe.
at June 02, 2020 No comments:

A pot of loveliness! 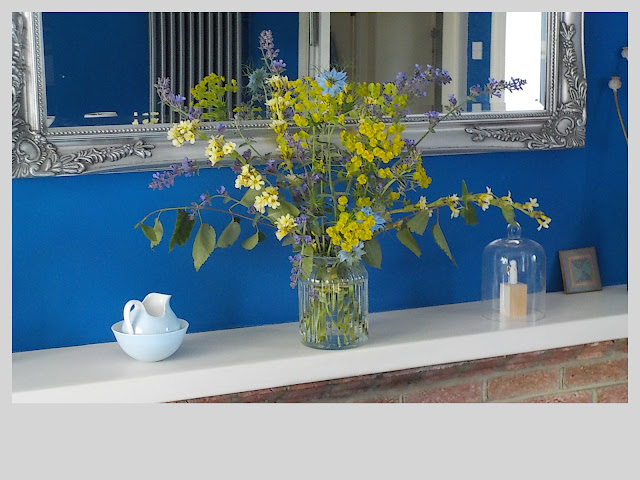 Doing a bit of garden nipping and snipping last night, I needed to clear some airspace for a rather small plant just coming into bud.  Largely overcrowded by catmint - the blue spikes you can see several of above, I certainly didn't want to just put them in the garden waste.  As there were about 10 stems, I wondered what would "go with", and before I knew it I had enough for a bunch on the mantelpiece!

Nepetia (catmint - the dark blue spikes)
Sisyrinchium (the yellow flowers on long stems - good for seeding anywhere.... they just pop up!)
Ephorbia (commonly called spurge - the lime green ones, and those are not flowers but bracts - flowers so small you can't see them)
Nigella (love-in-the-mist commonly, which is such a lovely name.  Again, these seed anywhere and everywhere..... just pull out the ones you don't want!)

So I got a lovely pot full at no charge, and all my own work -  together with nature, of course.  Such a joy to have a garden during lock-down.  I can empty my mind and just do a bit of pottering!!