At last!  Only had this wardrobe about 7 years, bought second hand  and knew it was just what was needed for our guest bedroom - as it is a multipurpose item (they used to be called "gentlemen's wardrobes").  So, this is what it looked like before: 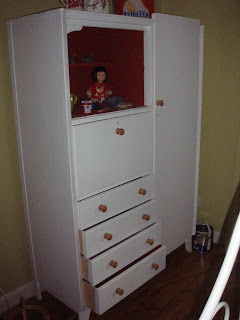 It has a hanging space, a cupboard (used to have sliding doors of some kind but those were long gone by the time I got it.... a drop down desk top (with pidgeon holes for envelopes, pens etc in this space) and then below that four good sized drawers.  It also originally had a covered wire especially to hang ties on the inside of the long door.

OH made two doors for the top space, mounted on piano hinges, and we had two little handles from other furniture, long gone and never used..... and also affixed a magnet to close the desk top as the key was gone and the lock b.uggered. 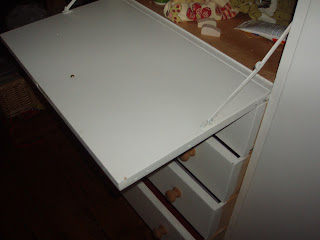 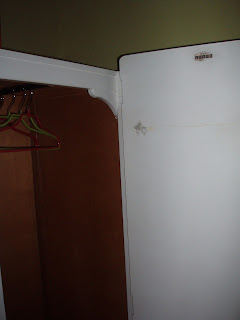 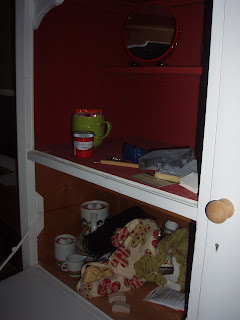 So, full of tringum trangums which everyone has around the house, here it was in its former dowdy glory. 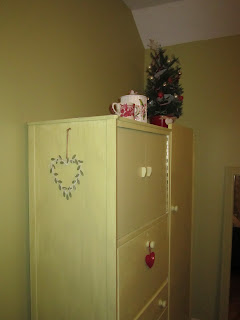 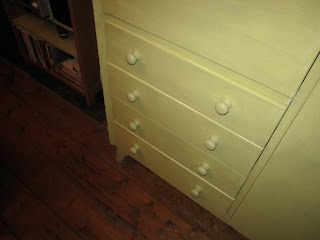 complete with tree for December guests! 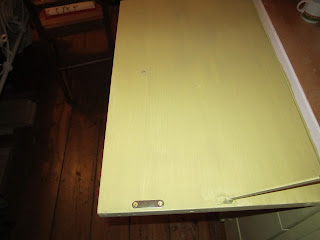 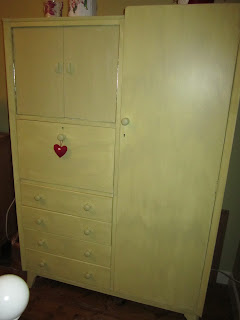 and here she is in all her shabby glory.  Better in daylight perhaps, so I may do the pics again, but it was very satisfying getting it finished to tone in with the rest of the room.  So at last, room complete.

PS - in case you are wondering why the paint job looks as though it didn't go on very well, that it how I meant her to look, Honestly!!!

The cover of this short novel is just perfect.  A shapely ankle, a nice waist, and a
dress that Wilfred wonders how the wearer gets out of.......and that's the problem, for instead of asking the wearer how she undoes the dress, he suddenly proposes.  A batchelor and virgin at 27, Wilfred is the village  undertaker, and a rush of testosterone on a hot day leads him into a life he does not want, nor is he prepared for.  For the wearer of the yellow dress, Grace, the doctor's daughter, says yes.   Not so bad perhaps, except that Wilfred soon realises that he has no feelings for Grace, and we, the readers, also realise that Grace has a secret of her own, one she is unlikely to ever share.

Lovely writing style, conjuring up the small mindedness of village life in the 1920s, how important it was to have a career that would not fail you, and how important keeping up appearances was then.  The descriptions throughout - the polishing of the hearse, the brushing of the jacket, the willow pattern plates that dinner is served on at the doctor's house, bring this village and the story within it to life.  The author, Wendy Jones has captured the feelings of the three main characters so well, and although Wilfred starts off as a quiet, shy, keep your head down kind of man, just see what happens when true love gives him the strength to blossom. 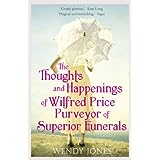 Now I found this today, reproduced on another blog..... and I am sure no-one will mind me reproducing it all over again!

2. The right to skip pages

3. The right to not finish

4. The right to reread

5. The right to read anything

6. The right to escapism

7. The right to read anywhere

8. The right to browse

9. The right to read out loud

King Peggy is Peggieline Bartels, a US citizen, and a secretary at the Ghanian Embassy in Washington.  Well, for around 11 months of each year, anyway.  But for the other month or so, she is the King of Otuam, a fishing village of around 7,000 souls most of whom are poor, and jobless.

When the ancestors chose her from the list of possibles (along with some of the village elders - more of that as the book unfolds) it was more than a shock.  She had a life elsewhere.  The last time she had visited the village was several years before, when her mother died.  So to step off the plane and be treated like royalty was something else again.  But it didn't take long for Peggy to realise that several things were wrong.  The village taxes were gone - and as they had been paid, someone must have recieved them and spent them.  Village land had been sold off, again, no money to show for it.  Her elders were at first very respectful, but only superficially, as it soon became obvious that a woman's place was not on the throne, but being subserviant to her male elders and betters.

Peggy is not a rich woman.  She has to work, and lives in a one bedroom apartment in Maryland, USA.  In Otuam she is king, although the palace is only cement block built, leaky and is falling apart, and there is no money to bury the former king who has been in the fridge at the morgue for some time.  How to give him a good burial, how to raise money for clean water in the town, how to get more kids into school - and that's just for starters, for Peggy is king for life, and there is much to be done.  How she sets out to achieve those aims, get the village on her side, show up the people who have stolen village money and are trying to belittle her is Peggy's story.  She is assisted in the writing of this book by journalist Eleanor Herman, who herself paid for one of the two bore-holes bringing clean water up into the town, and has accompanied Peggy on two trips to Otuam.  Nice interview with King Peggy here http://www.youtube.com/watch?v=RoKei1lqk58&feature=related

Alexander McCall Smith says "this is an astonishing and wonderful book about a real-life Mma Ramotswe.  It is an utter joy".  He's right.  It is.
at November 06, 2012 2 comments: