Six Years by Harlan Coben   or
Just One Evil Act by Elizabeth George
at September 30, 2014 No comments:

Summerhouse - from start to finish(ish)

We used to have a garage.  Full of things we couldn't find a home for and things we couldn't decide what to do with.  Not a car of course(!).  The car lives permanently outside.  But this pic was taken in Spring 2012, when we finally decided enough was enough.  What's that you say?  "Can't see the garage?"  Look again - stealthily disguised behind the cherry tree completely overgrown.... are you sure you can't spot it?!!! 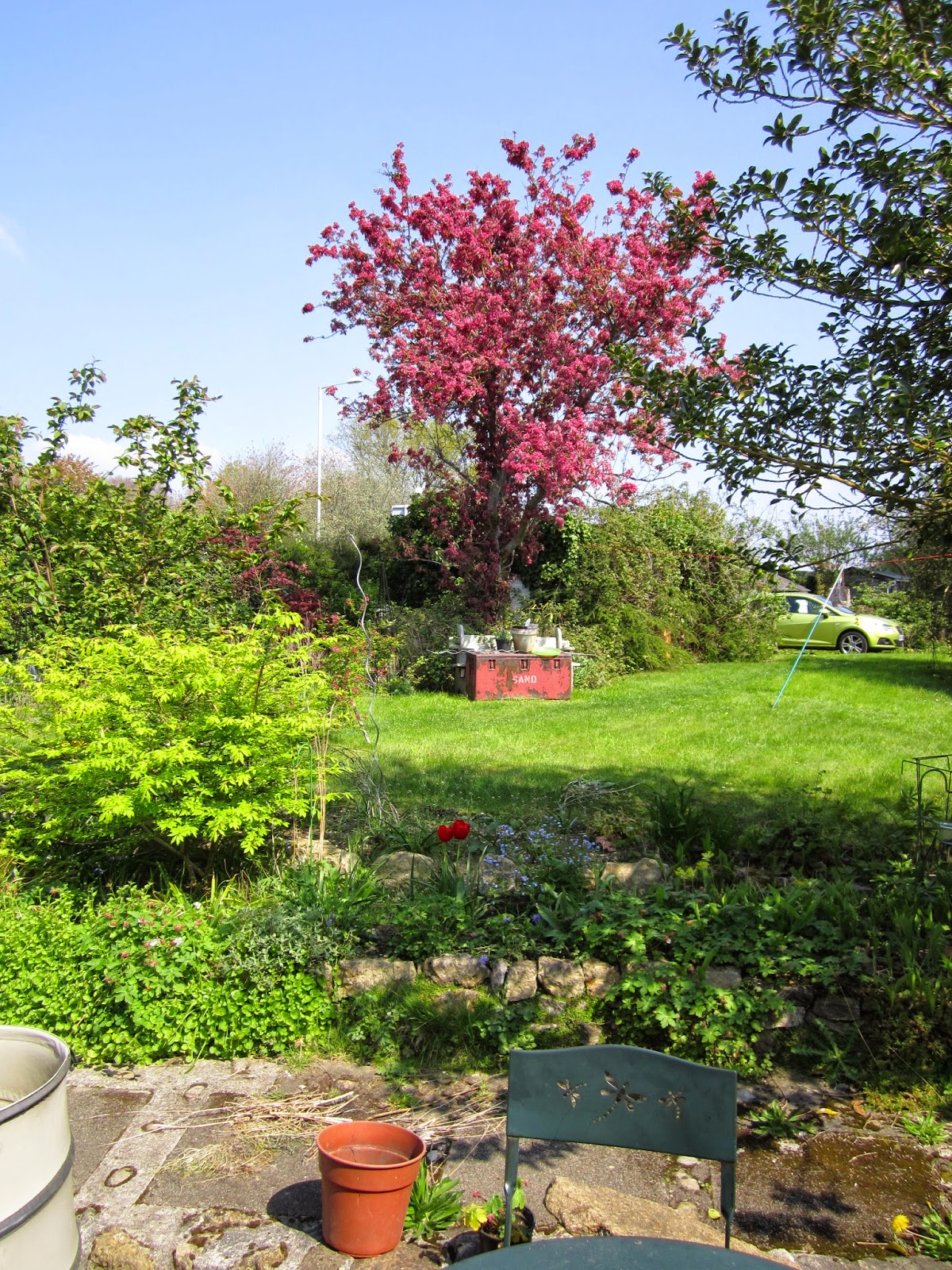 So we decided that we'd turn it into a Summerhouse.  We called in a builder, who went inside, poked about and said "Not  going to take your money.  Whatever I do to this to make it into a summerhouse, you will never be able to use it for that in the cold months, as it's all concrete with a concrete floor and you can't get it warm".  What a nice guy - and he didn't charge for that advice, either!

We talked a lot.  Then we paid for the garage to be taken down and disposed of.  But first of course, we had to get rid of the contents, and the ivy and brambles that covered it!!  And this is what it looked like on a grey day when the stuff that was covering the roof had been removed. 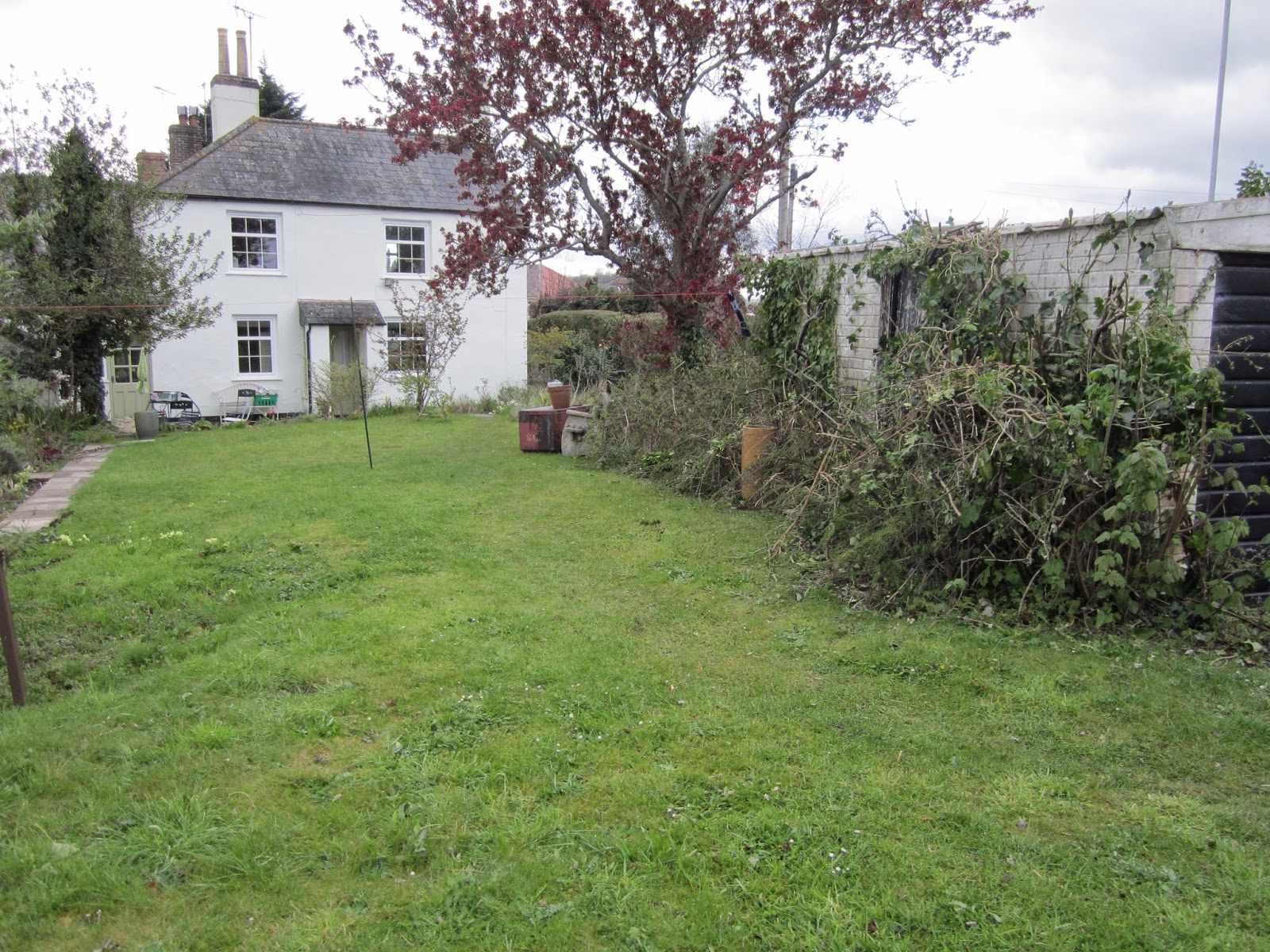 It had an asbestos roof, so we had to pay extra for the removal of that too.  At this stage we had no idea exactly what we were going to do, but we still thought that a Summerhouse was a good idea. We turned out all the rubbish important stuff stored inside, gave some away, then found a place locally who would let us save the rest of the important stuff in their barn for a month or so.  It turned out to be nearly a year later that we retrieved it, but hey! who's counting. (By the way  - when we went to collect it, we took more decisions about what to keep, and do you know, in the end we kept spare tiles for the kitchen "just in case", a garden hose, and some bags of garden sand.  The rest was given away.) 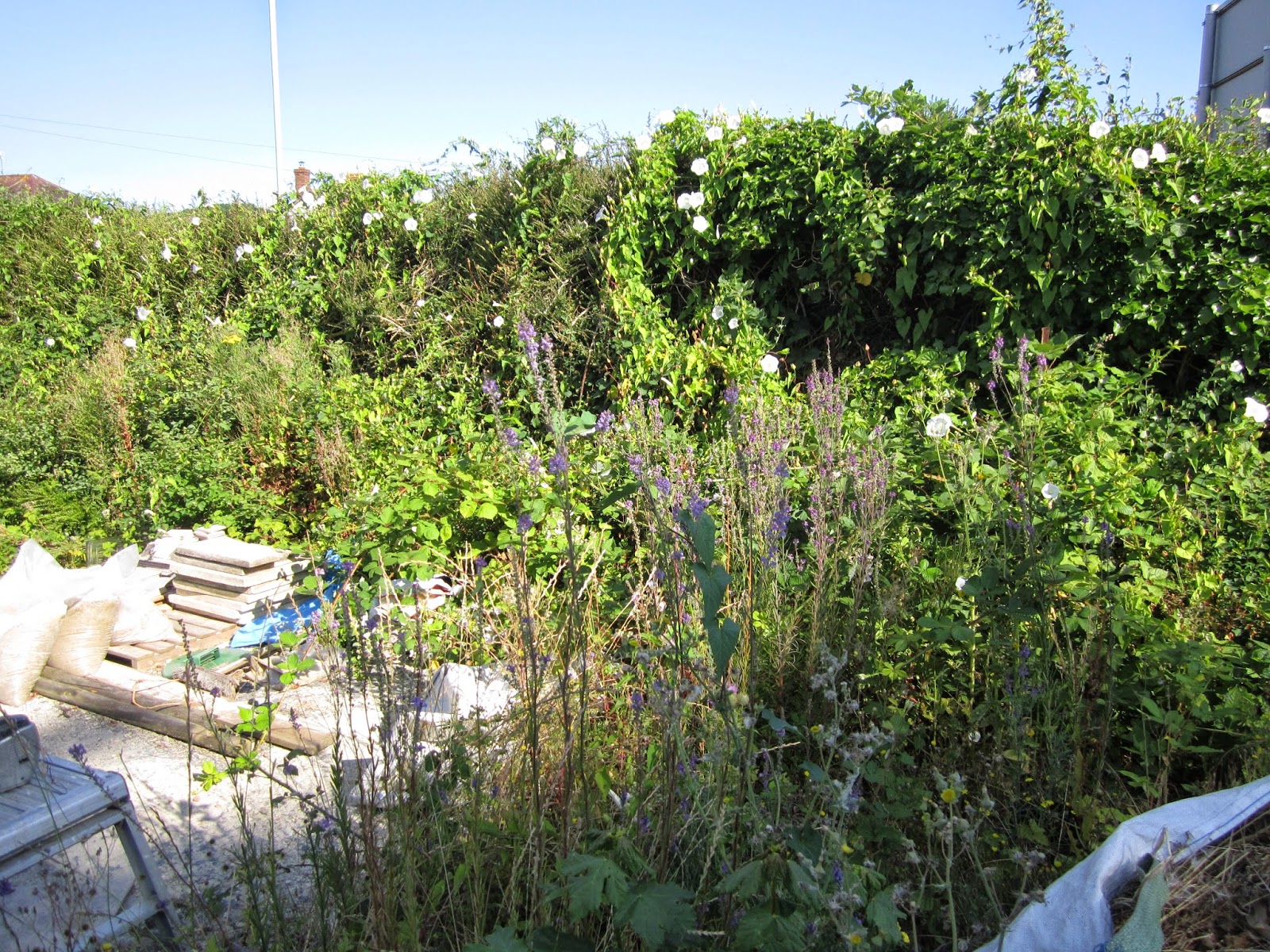 The rest of that year we just let weeds grow and wondered what to do.  We visited a complany who supplied wooden buildings, had a look round, talked about the quality of the wood and the design of the buildings and said "yes.... probably".  Then came Autumn, then Winter, then Spring 2013. 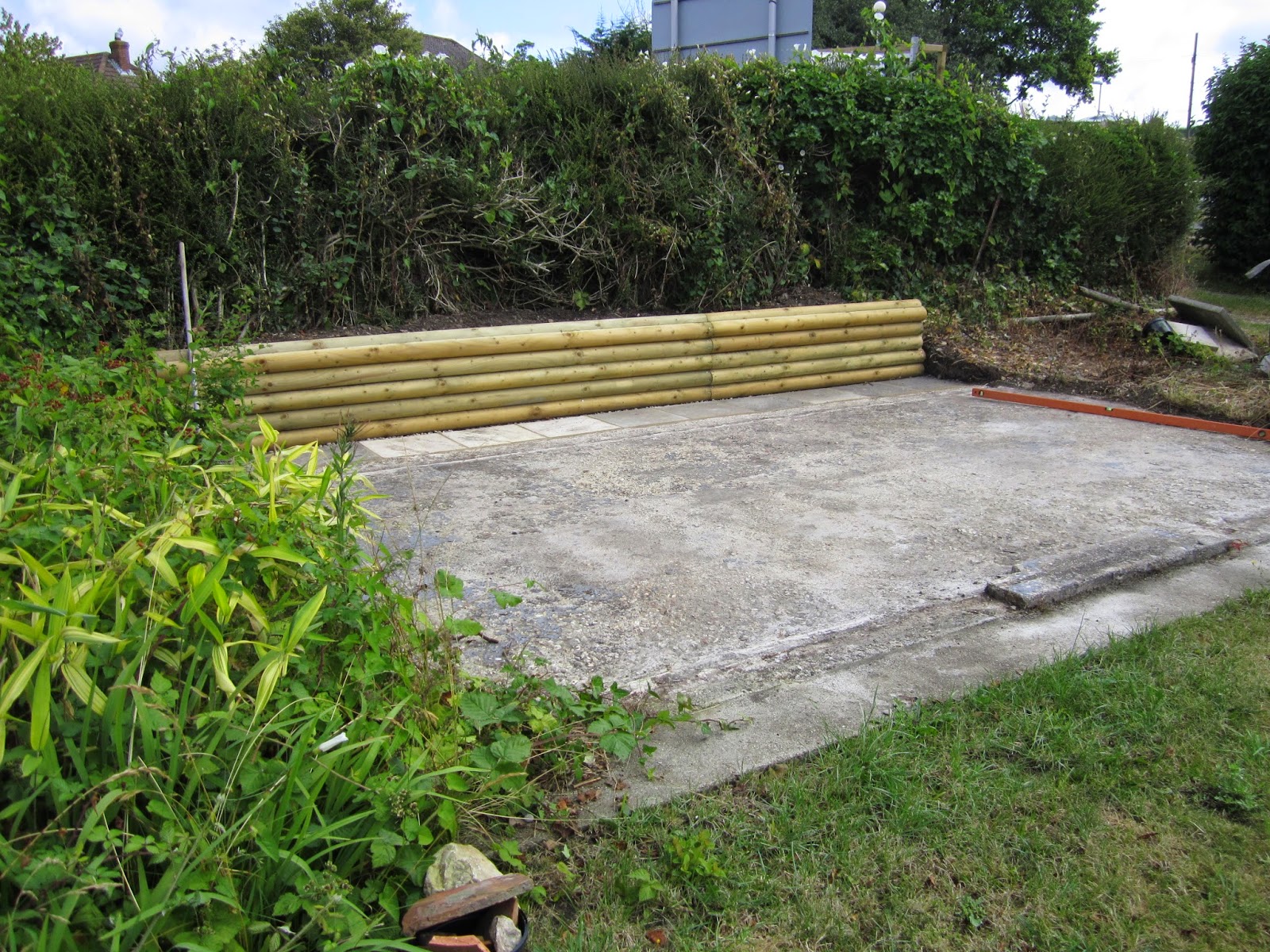 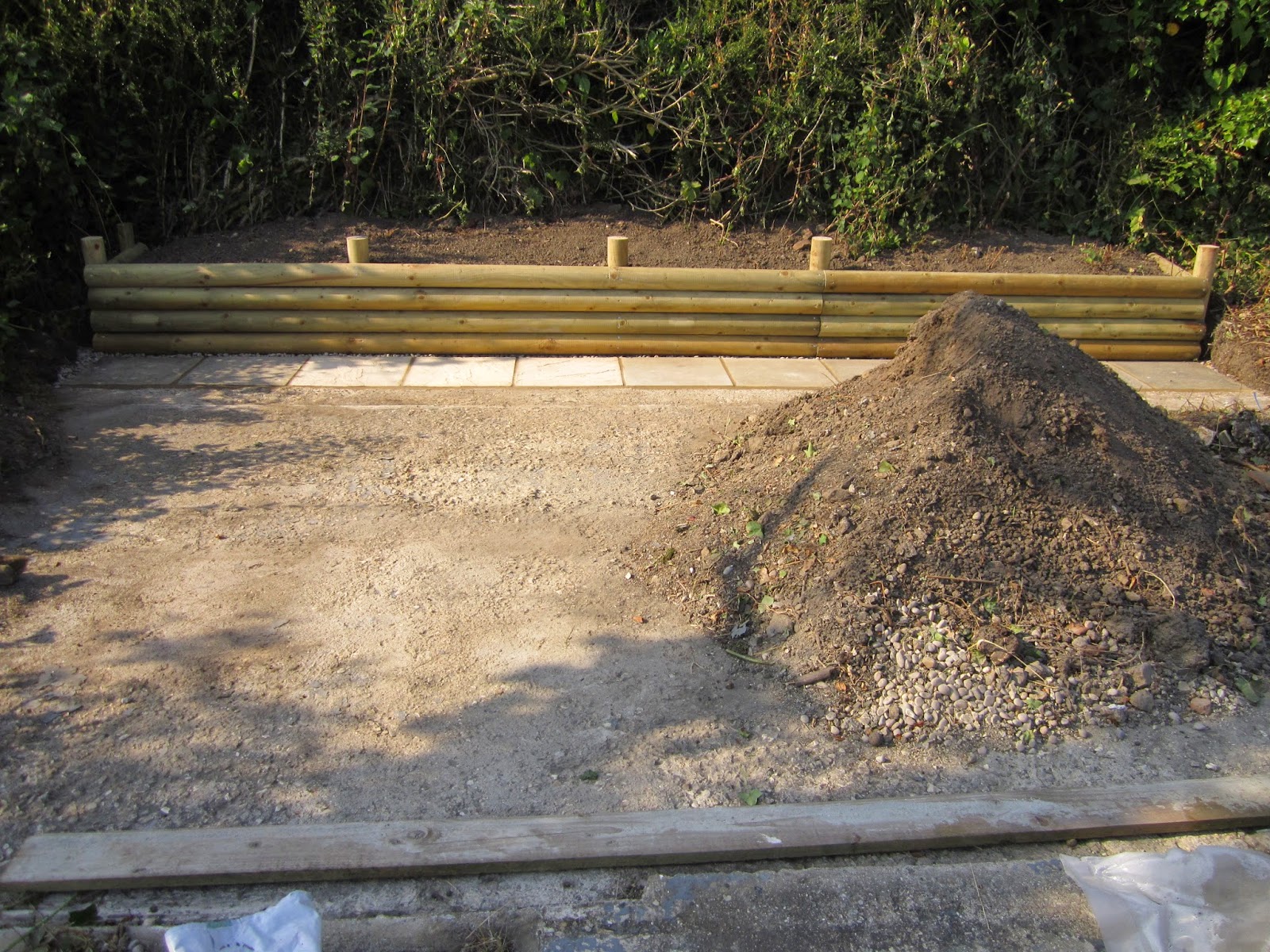 And then our garden maintenance man (I only do design - hahaha!) came, built the retaining log wall, laid a path that would be at the back of the new building,  and worked his socks off on the hottest weekend of 2013. Lovely job too!  See the little pebbles under the logs?  That's for run-off, so that no water lays around in the wet weather.  (Clever, huh?) 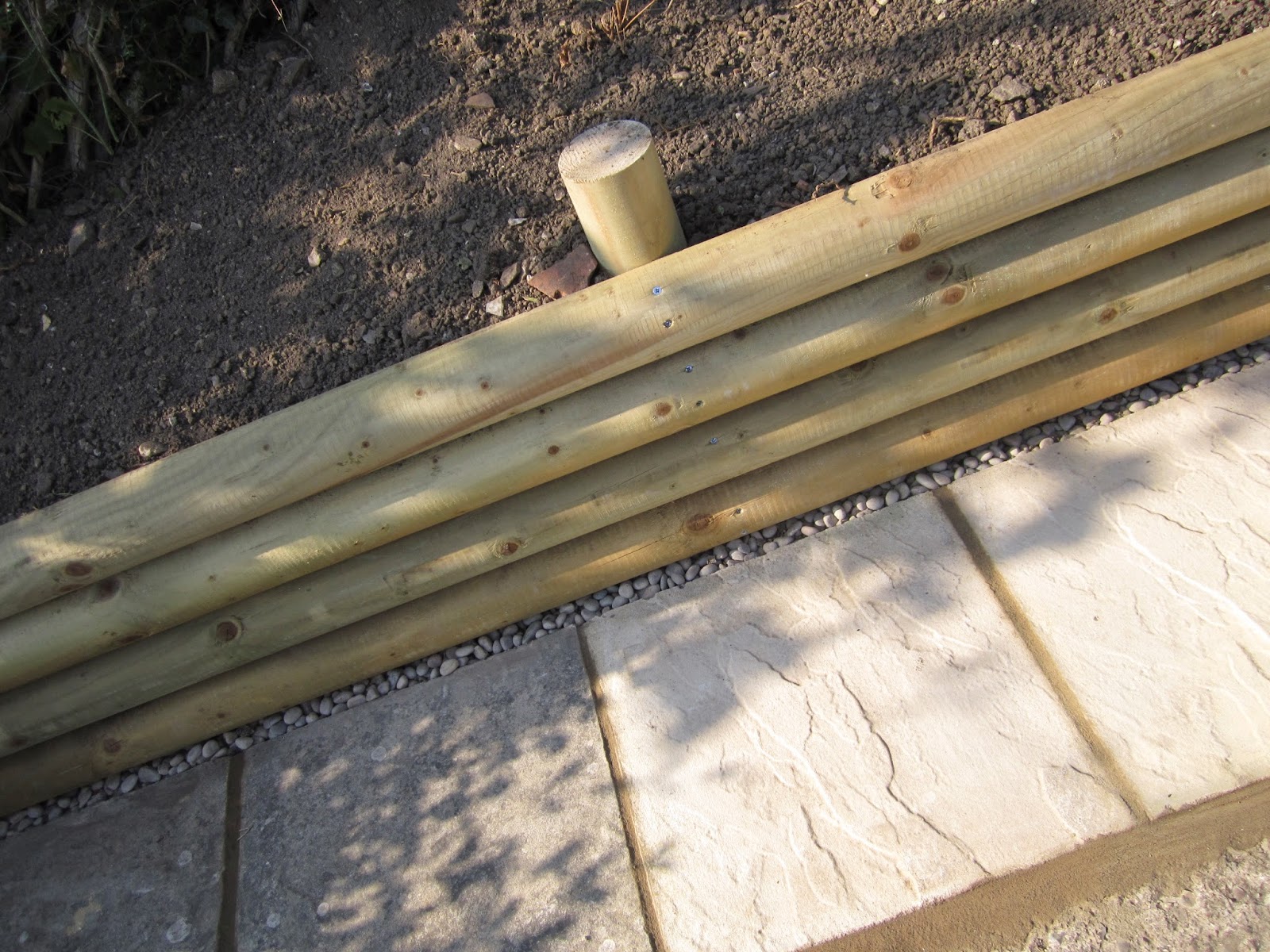 So - we ordered the Summerhouse - 15ft x 8 ft, and one morning in July it was delivered in pieces with a team of two Polish gentlemen who were the "erectors".  They started at 9.30 am....... 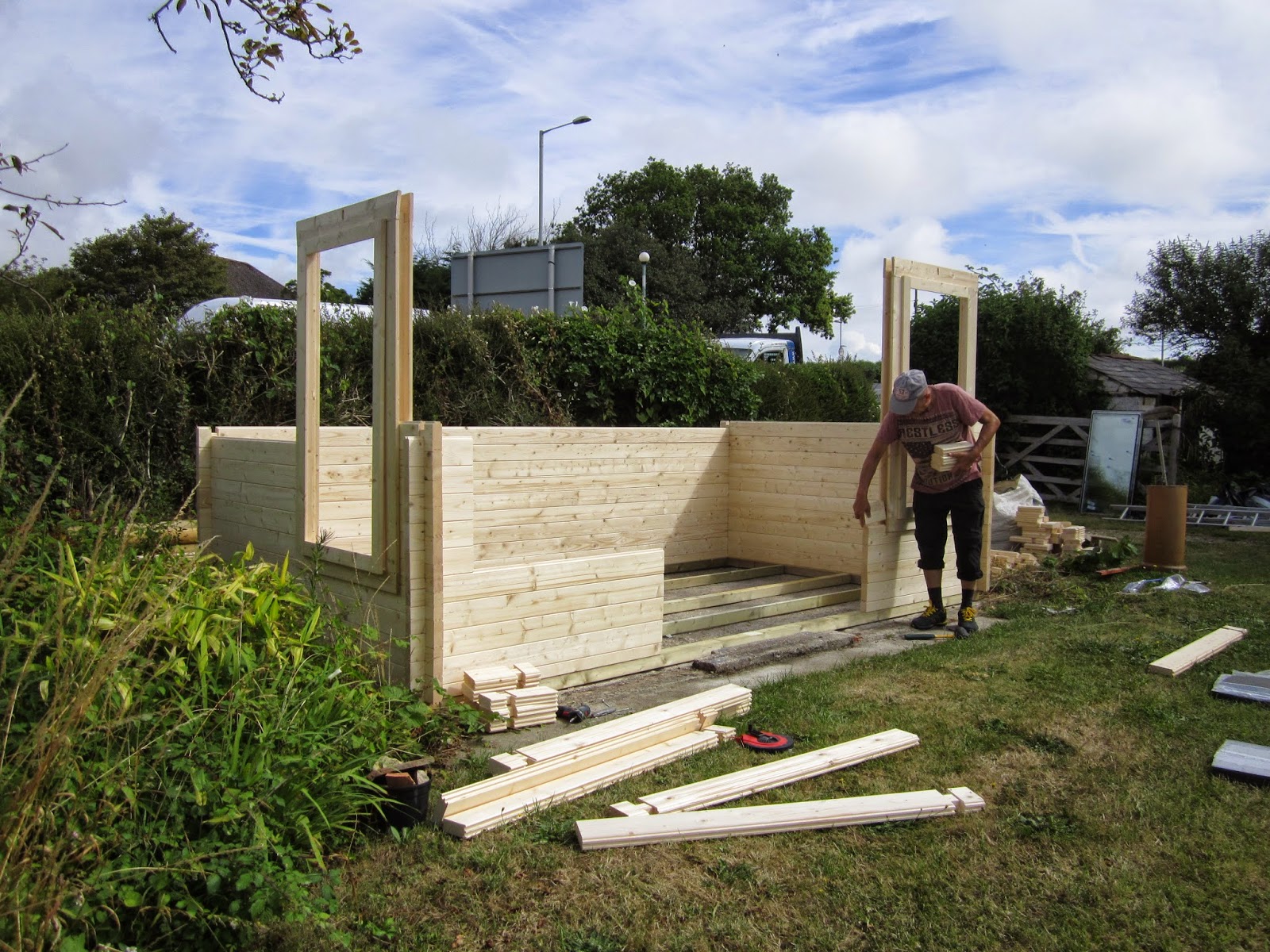 refused a lunch break, accepted lots of drinks hot and cold  and were driving away by 2.30 pm.  They'd finished: doors on, windows in  roof on and ready to use. 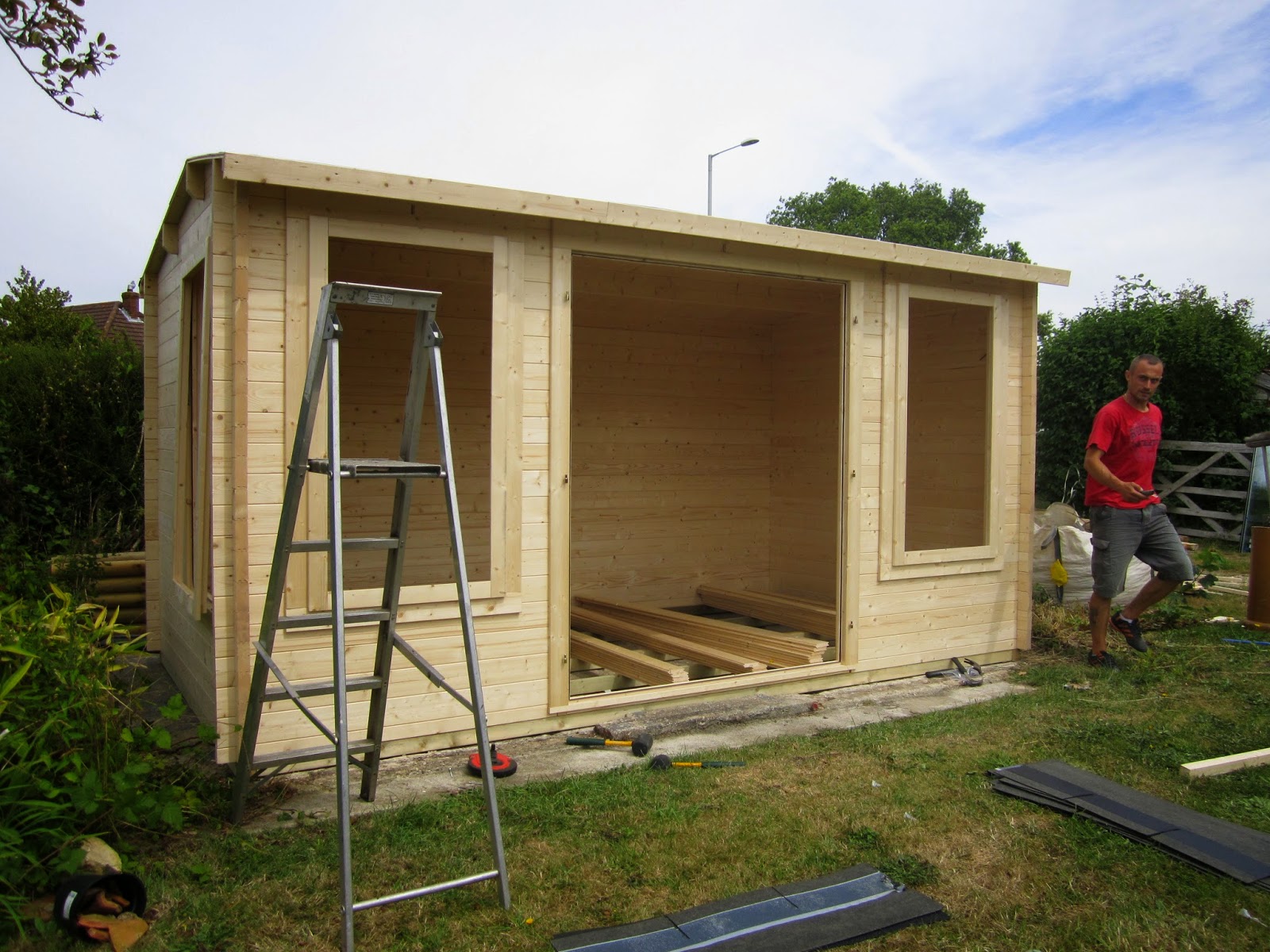 This last pic is about half was through...... floor not down, windows and doors not fitted.  My only regret is that I didn't take more pics!  Anyway, it's been up and used for a year or so now. The outside is painted a turquoisey-green and the inside.... well, I have plans for that.  Watch this space for more Summerhouse news.

The Road to Reckoning - Robert Lautner 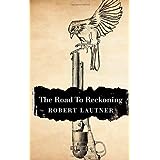 Tom is a slightly built 12 year old, on the road with his salesman father, who has given up door to door spectacle selling for the touting of Samuel Colt's new revolver in the 1830s of Eastern America. Tom's mother is already dead of the pox, and he's only too pleased to accompany his father on an exciting journey. But as Tom says - "I, to this day, hold only one truth; if a man chooses to carry a gun he will get shot. My father agreed to carry twelve".


The cover will be clear by the time you have finished this short, poignant read. I liked it a lot (the cover and the read). This is the author's first novel, and the cover says it will enthral fans of Cold Mountain and True Grit - however, I am not sure at what market this is aimed at, as I took it to be a YA read, which I feel it most definitely is; as an older reader I enjoyed it immensly, cheering twelve year old Tom Walker on and hoping that he could get home without death catching his coat tails. I certainly felt that if you had read Cold Mountain and picked this up after reading the back cover you might be disappointed, as the print is large, the book is short (200+ pages), and is certainly a quick read. However, like True Grit, it has a larger than life character in Henry Stands; who this reader loved nearly on first appearance.
at September 21, 2014 No comments:

What to read in September - Mrs Mac suggests......

that you find a book with an emotion in the title!  For example -