May is such a lovely month here in the UK.  Trees are flowering, summer flowers are budding up and ready to go, the world is a pretty place, even when war is tearing countries apart and bullies are winning.  Be that as it may, I looked on my shelves tonight for


A book that looks boring!
Adopt that old maxim that you can't judge a book by it's cover and see what you can find on your shelves that looks boring at first sight.  I don't know where I got my choice, but it's been on the shelves a while.  The cover is a group of adolescents showing off in the street, a black and white photograph, which has never looked interesting enough - but now it's off the shelf it seems to be much more interesting than it looks.... it's 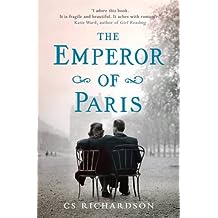 A quiet little gem, this one.  If you like beautifully written sentences, fairy tales, a hint of romance, then you might seek this one out.  There are several characters in this book and at first their lives seem to have nothing whatsoever to do with each other. Time skips about a bit too.  But wait.  And read on.  At about the half way mark the threads start to knit up.

There is Octavio, born on the 8th August, 1908 (what else would he be called?), the son of a baker; and there is Isabeau,  with her scarred face, painting restorer at the Louvre.  Both are shy and lonely.  Then there is Octavio's father, who returns from the Great War mentally broken; Jacob the artist who cannot sell a sketch; and Henri, the second hand bookseller - together with other lesser characters, these threads will eventually come together and form a wonderful picture of Paris in the first part of the twentieth century, and involve you in some stories about life, some hopeful, some sad.  Lovely.
at April 27, 2017 No comments:

Did I see a Brown Angus in my garden a few days ago?  What I thought I saw was a brown butterfly with yellow spots.  I have looked at dozens of pics of both butterflies and moths since then, and the nearest both in identity and location would seem to be the Angus Brown.  I am not a lepidopterist (is that the right word?).  There is a blue that is similar (not true blue with with the blue tinge, but it was not that), but this was def. brown.  Sadly I did not see the underneath - or rather did not notice, perhaps - as it was there and gone in a couple of seconds.  But I had never seen one before, so tried to identify it.  This is not my picture, either, but it does give a clear identity of the Brown Angus.

So, a bit of a mystery then, at Pine Tree Cottage!

Of Mice and Men - John Steinbeck


This is only the third Steinbeck that I have read.  I came to him rather late, probably because when I was at school we didn't have to analyse the arse off a book to know what literature was (and still is).  From Amazon, I learn that there are loads of editions of this with notes to help you understand........ Really?  This is a novella of just over 100 pages, and even if you are a slow reader, you could polish this off in a couple of days and you'd understand it, too.  And I know from remarks from other booky folk that they don't "do" Steinbeck because they were sick of him before school ended.  Sad, sad, and a loss for them, for they are books to grip the heart in a number of different ways.

Let me tell you a little about this one.  There is no date or time line for it, but as it was published in the late 1930s originally, it's a sure thing that the setting was the American Depression.  It's about men.  About how they do things, how they feel about things, how they get along.   It shows it's age - remember that sexism was not invented in 1937;  people still called those with a dark skin "niggers"; and in this book a woman with just a bit too much rouge, lipstick and curled hair is a "tart".  But don't take offence.  The world was a different place then.

Lennie is a giant of a man, tall, broad, huge hands and with a heart of gold.  A mental age of maybe 5 years, and not much of a memory, except for the things George tells him.  We don't need to know what the original relationship was when they were children, but they have certainly known each other most of their lives, and George is now stuck with Lennie.   The two of them are drifters.  They hitch lifts, they walk, they take menial farm jobs all over California.  They do what they can, and they dream.  The same dream for both of them.  They are going to save enough to buy a small farm, some hens, enough vegetables to feed themselves, a couple of pigs for slaughter every year, and the rabbits.  Lennie is addicted to soft things - animal fur, velvet; so the thought of keeping those soft furry creatures is his part of the dream.  But Lennie has no idea of his own strength.  And that is how trouble creeps into their itinerant life.

If you've never seen a film of this book, don't go looking for it, because no-one can, I think, do justice to Steinbeck's word pictures.  Just read the book, with all its beauty, its hardship, its cruelty, its sadness.  But do read it.

Should You Ask Me - Marianne Kavanagh

I loved this.  I couldn't put it down, and read it in a day.  Has just the right amount of mystery that keeps you reading, and the ending is just right too.
In the weeks approaching D-Day, 1944, Wareham in Dorset is full of Amerian soldiers.  The Second World War is in full flow.  London is being bombed and people are tired.  When two bodies are discovered near the coast it seems likely that they are old bodies, and they are likely to be the result of an old quarry accident.  That is, until Mary Holmes walks into the local police station and states that she knows about the bodies and she killed them both.  She's over eighty, and the Sargeant asks a young policeman to take her statement. She tells a long and meandering tale, and it may not even be true.  And wihilst William, the war damaged constable listens to Mary, he is thinking.  For he too has a tale to tell and it is tearing him apart.
Set on the Isle of Purbeck, Kavanagh has got everything so right.  The village names, the  geography, even the names of businesses in town (Frisby's shoes, for goodness sake!).  She has a style that is easy to read, involves you staight away, and produces empathy for both the leading characters. A real page turner, a short of old-fashioned thriller (no serial murders or drugged wives here!), so good that I'd recommend it it anyone who enjoys a read a little off the mainstream.

I felt quite at home in Paris reading this book. It has a familiar ring - a large city, trouble brewing in a hot Summer, and the residents of a apartment block, which at one time was a whole house or two. I got to know several of the people who live there, some better than others and some not really at all. Into this building comes Edward, a young Englishman who has taken the offer of the use of a friend's flat for a while, after suffering the devastating loss of his beloved sister in a traffic accident. I think it is fair to say that when people live in blocks of flats or apartments, they get to guess things about their neighbours, but don't necessarily get to know them. There's a family with three children under five, the mother washed out and on the verge of a breakdown. There's a couple in love and married for 30 years but she doesn't know that he no longer has a job to go to and leaves the house every morning to go across Paris and sit in a cheap cafe reading the paper all day. Then, a newly married Muslim couple buy one of the apartments, and move in...... It's a really hot Summer in Paris, tempers are frayed, things go wrong, and in the middle of it all the man without the job has a conversation with a new "friend".
The tension can be felt, just there, under the surface. What is going to happen? Someone is going to get hurt, aren't they? I found myself worrying about Edward;  the wife with the children, and the man without a job, and the rough sleeper across the road - and the others too. I dislike the mob mentality that large groups wear, I just see no way to stop them. Perhaps something that hot Paris Summer will change things for everyone concerned.
The author is English, but spent three years in Paris, and she certainly gives you a feel for it. I liked her style a lot - just a story about people, but the mounting tension made it a page turner for me. I recommend this and look forward to more by Fran Cooper.