Willie Beech is evacuated to the countryside as the Second World War breaks out. A sad deprived child, he slowly begins to flourish under the care of Tom Oakley. But then his mother summons him back to war-torm London..... will he ever see Mr Tom again?
Republished in 2003 under the Puffin Modern Classics for children, this is a must read, even if you never read children's books, and can't understand the attraction. Its not the best written book ever, but it made me want to devour it, hour after hour. Willie Beech, aged 9, arrives with a train full of evacuees, stitched into his underwear for the Winter, wearing thin, shabby clothes and plimsoles, and covered in sores and bruises. He is taken to the home of Tom Oakley, a man in his 60's, widowed at 20, and a loner ever since, except for his dog, Sam. He takes the boy in only because with war approaching, it's his duty. The boy is shocked to get a room of his own, and he sleeps under the bed the first night, because "beds are where the dead are laid out". Persuaded to sleep in the bed, he wets it for every night for a long time, and cannot understand why Mr Tom does not thrash him for this 'sin'. His abuse was not only that of the flesh. The things his Mother told him and threatened him with make it very difficult for Willie to understand why he is not punished on a daily basis. He can't read or write, but he can draw really well, and Mr Tom encourages him in this whilst helping him to recognise his written name and how to write it before he goes to the village school. At school he finds that not everyone is a bully, and that there are boys (and girls) there who want to be his pal. Amongst those children is Zach, another evacuee, a Jew whose parents are actors, and a boy who has his parents' gift - seen by the other children of course as just plain "showing off"! Zach becomes his closest friend, calls him Will because Willie might be misconstrued and begins to draw him out of his shell.
The second half of the book is somewhat darker - he is sent back to London at the request of his Mother, who is not well. When he returns home on the train, he is torn between Mr Tom who he does love, and his Mother, who he knows he should love, but has never ever given him a reason to do so. What he finds in London is horror and violence and a Mother who is obviously mentally unbalanced. Mr Tom becomes increasingly worried and eventually takes the train to London himself to find out if Will is still alive. What he finds at the house filled me with such sadness that I sobbed aloud, and although this is fiction, I know that real life for some children is the same. This is not a book with a completely happy ending, although it ends well for Will - but for a child reader, it introduces them to many things that they will not perhaps have experienced. The joy of companionship both animal and human; education and teachers who care; good food as an intirely new thing; a little sex education; the horror of death and loss, the realisation that everyone has a worth. And other people's lives woven together, which makes us all what we are.
at May 26, 2011 No comments:

Set in Dublin in the 1920's this is Nan and Mary Cantwell's story. Nan, 14, and living with adolescence, and Mary, loving the cat, the hen, the hedgehog and Nellie the maid unconditionally, watch their parents' life. Father, who runs a corset factory, and acts like the Indian Army officer he once was, the the bully he still is; Mother, who likes to smoke and read mysteries are both people the girls don't really understand. Father takes in waifs and strays for short periods of time to help them "make a new start", and Nellie does very little except prepare food and leave the washing up for the girls to do when she goes home at night. And then, one day, an exotic visitor arrives on the doorstep and it isn't long before she is occupying the marital bedroom, with Father in the spare room, Mother in the girls' room, and the girls sleeping in the kitchen. Life is starting to unravel.....
Clare Boylan has a beautiful way with words. You can hear the voices, see the clothes, understand the undercurrents. I enjoyed this very much, and recommend it.
at May 24, 2011 No comments:

Sadie and Jacob Rosenblum arrive in England in 1937 - Jewish refugees from Berlin. The first thing they are handed is a list, published for the use of refugees to familiarise themself with the new country, and to make integration easier. Mr Rosenblum's first name is quickly changed to Jack, and the original short list is added to regularly by Jack who aspires to become a real "Englishman". He sets up a small carpet factory, and quickly becomes successful, whilst Sadie dreams of those she has left behind in Berlin, and never wishes to become integrated at all. Jack has only one dream left - to join a golf club. This proves difficult because he is Jewish (although every club he applies to leaves this unsaid); so, in the end, with the purchase of a run down cottage and 60 acres in Dorset, he decides that if he can't join, he will build his own. In the course of his endevours he and Sadie become different people, and the Dorset country folk who at first looked at these incomers with the kind of indifference that can only be guessed at, warm to this little man who asks for nothing else except that his golf course be finished by Coronation day - the Coronation of Elizabeth II.

I also like the serendipity of Baumtorte, a cake mentioned many times in the book, where each layer is a memory of someone, (when Sadie offers it to the ladies of the Coronation committee, they taste her sadness) - against the cake in "The Peculiar Sadness of Lemon Cake" (see review below), where a child tastes her mother's sadness for the first time.

I finished with Mr Rosenblum with a tear in my eye - after laughing many times. I am familiar with the part of Dorset described, and could conjure it up in my mind's eye. A glorious short read, a little bit of fantasy and the love of the countryside. All you could ask for a Summer read.
at May 19, 2011 1 comment:

One Dog and his Boy - Eva Ibbotson

Eva Ibbotson's last ever book and just the kind of children's book that makes reading worthwhile. A real adventure, involving runaways, circuses, and some grownups who are not as likeable as they should be. Hal is a little boy with rich parents. His father is always away on business, and his mother is too too clean and hygenic, and loves shopping. For both of them there is really little room in their lives for their son. Everything is OK as long as he doesn't make the house untidy, and appreciates all the money they spend on presents for him. But he only wants one thing - a dog. And eventually, to keep him quiet, his parents rent a "Tottenham Terrier" for the weekend presuming that, like all children, he will soon tire of the dog. But of course, Hal and Fleck are made for each other, and when he has to go back to the rental shop, they are both distraught. By a fluke, fate arranges a breakout at the shop and the adventure begins! [copy of my Amazon review].
at May 09, 2011 No comments:

Just back from a week in Portugal. Mixed weather, good company 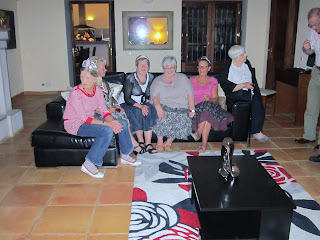 Ladies in tiaras, the night of the Royal Wedding - just prior to dinner! 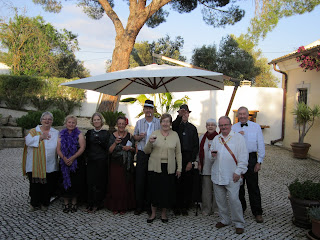 The cast of the Murder Mystery - me (cross-dresser and murderer!) far left.
Some of the stars below: 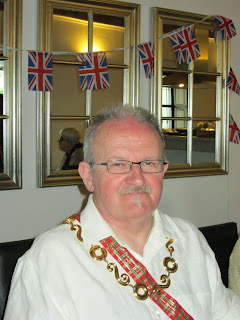 The Deputy Mayor of Casablanca! 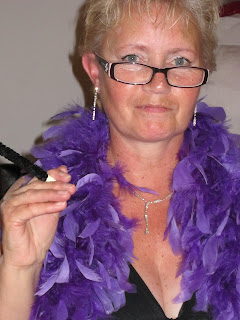 The fabulous femme fatale and art dealer all the way from Denmark. 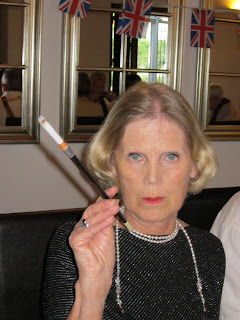 The very naughty (and haughty) Contess from somewhere east of Prague! 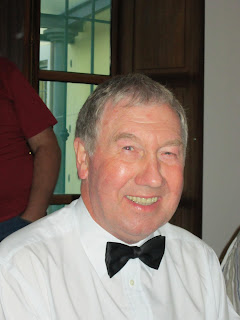 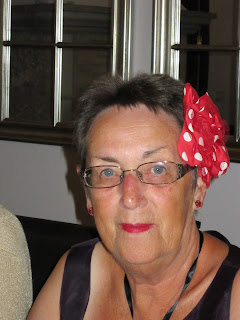 The jealous Spaniard who loved the man I murdered. 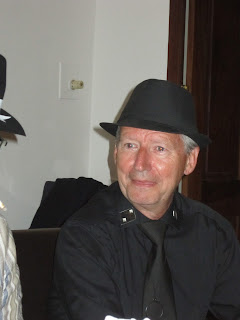 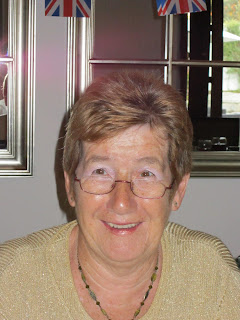 And a slapper in disguise (the deputy Mayor's wife with several men friends!) 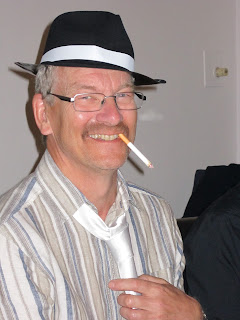 That damned Yank - and whose side was he on anyway? 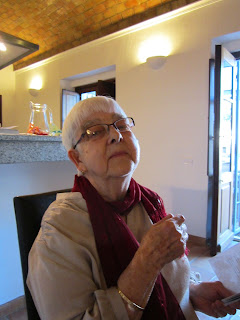 The deputy mayor's daughter hamming it up again - no comment! 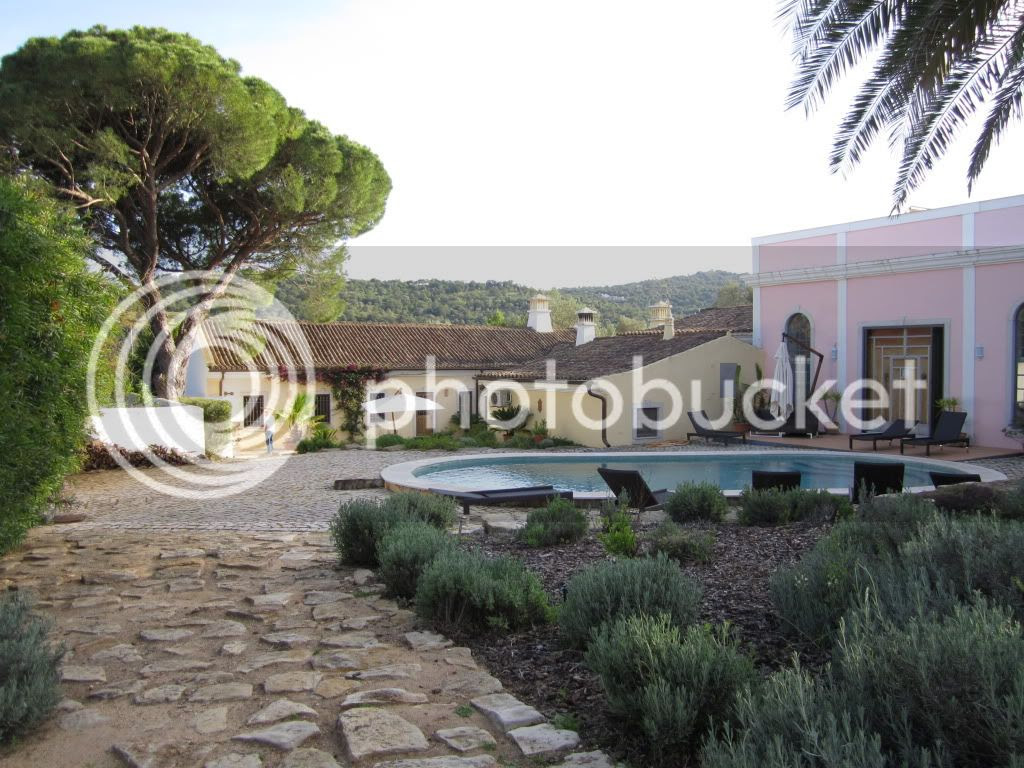 Lovely spot (picture is the garden from the pool down to the courtyard) in a tiny hamlet about 30 minutes from the coast at Faro, and about 10 minutes to the nearest town for shopping.
(www.holiday-rentals.co.uk/p490563). We had 4 days grey, 3 days sunny - but no cold winds or bad rain. I took three books, once of which I was already reading, and managed to finish on the plane coming home. It was like watching paint dry - wish I'd never started the bloomin' thing, but ah, well, its done now. It was Deceits of Time by Isobel Colgate, and although she wrote The Shooting Party, I'm afraid I didn't care for it at all.
at May 08, 2011 No comments: