All That I Am by Anna Funder

All That I Am is a novel using existing records and real people. I knew little of the period from 1918 until Hitler became chancellor, and I certainly knew nothing of Bavaria declaring independence from Germany in 1919.

This was a slow burner for me. I wasn't going to give up on it, but it took a few chapters for me to settle to it. But when I did, Oh!, what nuggets of research were there, laid out for me, brilliantly. There are two story tellers in this book. Ernst Toller, playwright, who died in exile in New York in 1939 - having served a prison sentence for being the leader (for a few days) of the Bavarian government; And Ruth Wesemann, who died in Australia early in the 21st century. The chapters alternate, but they are headed by character name, so it is easy to know who is telling the tale. But it really is the story of Dora Fabian that these two friends are telling - Dora, the love of Toller's life, and Dora, the cousin and closest friend of Ruth. Dora, who died because she could not stand by and leave the truth aside. The bravery of those German Jews who were desperate to tell the German people what was happening as Hitler made his play for power, and who were not safe even in London from the long arm of the Gestapo, is the reason for reading this book, that, and to pick up that little lost strand of history. The words are in English, but you will be able to see how different the German owners of the voices were from the English of that time.

A book that has no pleasant subject, but a book that should be read slowly, so that all the facts sink in. If we just change the name of Germany to an invented country such as Rhinetopia, it would be easy to describe this as a brilliant dystopian novel. Except that the dystopia is real, and the facts are there for the finding. A book that stuns the reader into taking notice.

Somerset,  around 1958, and here is recently bankrupt Jim;  desperately sorry for himself, having lost the business, the house, its contents and the car.  He and his wife Margaret, and two children, Billy and Sarah, are living in a farm cottage with hardly anything in it, their only entertainment a radio which Margaret managed to hide from the receivers.  School is the village school,  not like the big school in the big town at all, and Jim has to cycle 4 miles each way to Wells for work (a non-position offered by his wife's uncle)  and is trying to stay on the straight and narrow.  The waitress at the local cafe catches his attention........  The people they meet, those who help and those who don't, from the seedy Towker to the eccentric Leonora with her dirty house and 32 cats, are described here quietly and beautifully.
This is truly a little gem where less is more.  Not a word wasted, and yet you feel and see and experience all the feelings described.  Not for those who enjoy being frightened or thrilled, but a definite must read for those who love a well written novel.  Less than 200 pages and a joy to read.
(copy of Amazon review) 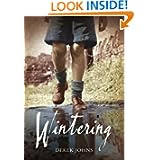 The Unlikely Pilgrimage of Harold Fry by Rachel Joyce

Harold Fry is a just-retired, very unhappy man, in a dead marriage, when he receives a letter from the other end of the country. A former colleague is in a hospice and she writes, just to touch hands, to tell him she is terminally ill. Harold writes a short reply, puts on his jacket and sets off for the post box - and finds he can't let go of the envelope. So he walks to the next post box, and the next, and suddenly, he has made up his mind that he will walk from South Devon to Berwick on Tweed, to say goodbye to Queenie, in the clothes he stands up in, a pair of boat shoes, and no mobile phone. Harold and his wife have been estranged for 20 or more years. During this long walk to Berwick she thinks again about their life together, and Harold thinks about his entire life, and what made him who he is.

I couldn't find a flaw in this novel. Harold is a man who you sympathise with, he is drawn so beautifully. Maureen, the wife left behind is cold, calculating, sharp-tongued, but also deeply hurt. During the walk you will find out why Harold is walking, why Maureen is so bitter, and you will find that you are cheering him on, not only for the walking, but for the fact that he does not want to let go of his marriage either. The characters met along the journey are also beautifully drawn and its not hard to conjure up the picture of each of them in your head. The chapters are not long, in fact sometimes just two pages, and each of the major characters is coaxed out of the first impressions so skillfully you just need to keep turning the pages. I will always keep with me the thought of one of the characters that "life .....is a slippery bugger...." It is, but Rachel Joyce has grasped Harold's life and in doing so has given us an astounding first novel.