On the 100th anniversary of WW1, as a nation here in the UK we have marked that event with a river of poppies at the Tower of London.  Some of us have read books set in that 1914-18 war.  A lot of fiction based on fact has been written on the subject, some of which would have a startling effect on you when read for the first time.  Michael Morpurgo's Private Peaceful is always one that I recommend if you wanted to read a little something (written for young readers, it is readable by any age) about that dreadful war.  And of course, War Horse  by the same author can be read by any age.  This year I also read All Quiet on the Western Front by Erich Maria Remarque which looks at the German view of your average young soldier. Just change the names from Fritz to Joe, Heinrich to Henry, and the view is the same.  Then, for a female view of war, there is My Dear I Wanted To Tell You by Maria Young.  It touches on the terrible injuries inflicted on young men, who had to live on with those injuries and has it's title based on postcards made available in field hospitals and places of recuperation, made to be filled in, so that the first part of the card read:

So for my November anniversary read I chose a non-fiction book - A Foriegn Field by Ben MacIntyre - a journalist who finds a hardly known story and gives it to you complete, research done, and very readable.  You might like to try Agent ZigZag for a riveting tale of WW2.

But with A Foreign Field MacIntyre brings to you a story that is very definitely not fiction, Those written about really did exist, and this small book (261 pages excluding bibliography, notes and index) will tell you not only the truth about a small assorted party of soldiers trapped in occupied France, but also facts about the war in the area to the north east of the Somme that was totally devastated, how and why; about a small village which thrived on gossip, the personalities there, and what happened after those soldiers where taken in and hidden by the villagers.  The number of total dead on all sides in WW1 is so large I have never been able to take it in - but reading this, I found myself stunned by the numbers who died in a day in several battles over the course of the war in this area.  I found myself questioning what exactly was going on in Villeret and the other small villages around about.  Towards the end of the book I found my questions answered in a satisfying way, even though mostly by questions the author asks i.e. what was he doing?  did they know? why didn't they?
An excellent example of how good research tells a good story.  Recommended, especially if you want to find out about a small place in a big war.


a real tour-de-force, a beautiful fable that is given legs by the author’s bravado use of the real (Google is in there, for instance, the actual campus) to sell us on a shadow world of the unreal and the speculative. Robin Sloan comes across as so bighearted, so in love with the world — the ancient world, the contemporary world — so in love with love, in love with friendship, in love with the idea that our technical abilities can serve as conduits for beauty, that the reader is swept along by his enthusiasm. It’s a lot of fun — but it’s also a powerful reading experience with a wonderful undeniability."

So - can I do better than George Saunders?  But that's a powerful  little description of a book I really, really enjoyed.  A book I finished with a smile on my face and a contented sigh - and let me tell you, not every book I read does that for me!

Mr Penumbra is the elderly proprietor of a bookshop in San Francisco, where Clay Jannon works the night shift (it's open 24 hours, right?) after his failure as a website designer for a company that has gone bankrupt.  It's an OK job, not many customers during his hours of 12.00 midnight to 8.00 am, so plenty of time to surf the net, have a look at the books..... but only the new books.  On the orders of Mr Penumbra, he's not to remove any of the books in the back of the shop.  Any of those on the tall, tall shelves that require ladders to reach the volumes.  Any of those at arm's length.  Those near the floor.  They are old, dusty, and frankly, for a while, he has no interest in them anyway, and neither do many customers.  Those that are interested tend to be a little odd, mostly over 50, and the book they borrow (for they cannot be bought) must be recorded in a leather-bound ledger together with a description of the customer.....

This book is full of references.  Old books, other languages, typefaces,The Mechanical Turk, people who really existed, companies that exist - and it's such fun!  Yes, it contains a description of Google's real campus.... and it refers to lots of things that Google can do for Clay when he sets out to solve a 500 year old mystery.  If you like codes, if you love fantasy trilogies (Perhaps Lord of the Rings or The Chronicles of Thomas Covenant), if you like a book with a villain, a hero, and some good friends,  if you are a bit of a computer nerd and sit up all night trying to write your own programmes; but most of all, if you like a book that makes you want to look up something on Wikipedia or elsewhere on the internet, but meanwhile makes you want to keep turning the pages, then this is the read for you.  And is the mystery finally solved?  Well, you'd have to read the book to find that out, wouldn't you?  But it's a great read, and for any of the reasons above that might make you think "she means me!" - I recommend it.

For information:  The yellow cover appears to be the US paperback, the other the UK paperback, and I note on Amazon that there is a new cover altogether which personally I don't like.  My favourite is the yellow. 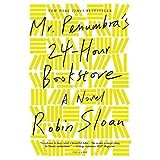 It's not all about books!!

What to read in November - Mrs Mac suggests:


A book with lost or found (or equivalent) in the title -

The Other Side of You - Salley Vickers

I couldn't stop reading this bitter sweet book.  David, a psychiatrist, and one of his patients, Elizabeth, an attempted suicide, each have baggage.  For her, it's the meeting of, and the loosing, of her soulmate; and for him, the loss of his brother in early childhood.   For several sessions, Elizabeth is unable to talk abot her attempted suicide (which was not a cry for help, but very much meant), until discussing an Italian painting with her doctor, she suddenly decides that it's worth telling her story.  In doing so, she becomes the catalyst for David to think again about his brother, how he died, and how his whole life has been affected by that.
I wonder how most of us would feel, meeting that soulmate and then loosing him the very next day;  the anguish that would go with that loss, the steps taken to fill the hole left by that loss, and the sudden re-meeting by chance, of that very person, so many years later?  I wonder how many of us have family history that we don't doubt?

It is a dark book - we know almost immediately that Elizabeth attempted suicide, but not why.  We also  know that she is David's patient, and that it is his job to "heal" his patient.  It takes a while for us to realise the facts behind the attempt.  It takes us a while, too, to understand that sometimes David gets too close to his patients.  His own personal life is in turmoil, something he slowly comes to acknowledge when Elizabeth is telling her story.  Dark it may be, but with redemption.  It is the story of love but  not between the doctor and the patient in the accepted sense of the word love.  It is so beautifully written that it's a master class in the description of feelings - If you haven't caught up with this one yet I recommend it.