The Flight of the Maidens - Jane Gardam 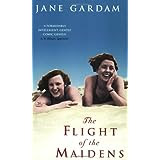 Yet another Jane Gardam - about which I can only ask "how does she do it?"  Every time I read one of hers it's different, brilliant, moving.......

It's 1946.  The Maidens are Ursula, Hetty and Lieselotte.  Eighteen, and with scholarships under their belts, one will go to Kings College, London,  and two to Cambridge.  Or will they?  Hetty has an interfering Mum, she gossips continually about her daughter with her friends at the local cafe, and then keeps saying sorry to Hetty afterwards.  She's having a bit of a "thing" with the vicar too, and Hetty doesn't even know if her father understands this, since shell-shock in WW1 has reduced him to the duties of grave digger.  Ursula, who's Mum is an amateur hairdresser working out of the front room of her house, has being going cycling with Ray, the boy who delivers the fish, since she was around 14.  And then there's Lieselotte, a German jew who arrived on one of the  last of the kindertransport trains from Germany in 1939, and who has been living a live of quiet desperation with a childless, Quaker couple ever since.

Over a period of a few months, between leaving school and starting at University, they all have adventures - not childish adventures, but life changing adventures.  Hetty to the Lake District to get away from her Mum, who is writing a letter a day; Ursula overnight youth hostelling where she discovers her real feelings for Ray, and Lieselotte.... well, she has a rather more far flung adventure.

I held my breath several times in the hope that all would work out well for these different but likeable women on the thresholds of their adult lives.  Don't think this is aimed at the YA market, it isn't;  she doesn't have a group in mind when she writes, she just writes - but I'm sure anyone who loves Jane Gardam (and those who have not found her yet) will love this one. 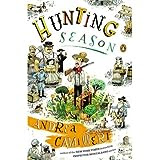 A boat arrives in the harbour at Vigata, Sicilly, 1880ish, and the last passenger off is a pharmacist who does not take long in setting up a new shop and setting out his wares. In the same town, there are various philanderers of both sexes, titled families, servants, priests and messengers, all linked up in some way or another, which becomes clear as the story progresses. Then deaths begin to occur, and all, at first,  have very reasonable explanations!
What a delight this little novella was. Only 148 pages long, but I suggest you take the phone of the hook and get to know the characters - all of whom have long names. A real latin feel to it - and nicely amusing. I was put in mind of One Hundred Years of Solitude, although it was nothing like it, either in length or content. Andrea Camilleri is the author of the Inspector Montalbano books, though this is nothing like them, either!
at July 27, 2014 No comments:

The Cleaner of Chartres - Salley Vickers

The publishers seem to have changed the cover of this too many times in the two years since it was published, this appears to be a newer one, so have chosen it against the one shown as current on Amazon.  Anyway, another book passed on to me, and having read two others of Sally Vickers', I was looking forward to this one, and indeed, really enjoyed it, polishing it off in one day!
Agnes Morel, a foundling named after a) a saint, and b) the finder's favourite food, spends her early life in the care of nuns after being found, in a basket, in an orchard by a batchelor farmer.  A series of mishaps in her early life colour her later life, and at around age twenty she finds herself sleeping rough on the steps of Chartres Cathedral.  It is not long before she finds a niche in the town of Chartres, cleaning the floor of the cathedral, cleaning other people's homes, nude modeling for a local artist, live-in caring for an elderly lady and all the while keeping her secrets to herself.  Her early life has held at least two tragedies, and we, the readers, get to hear about them not from her lips but from others.  Several of the characters in this short and bitter-sweet read have things in their own past they do not care to discuss with others, but we will find out about them.  Loved the style of this novel, with the past and the present in alternate chapters, and liked the characterisation too, with Agnes being present throughout, but rather vaguely described at first, gaining more colour and character as the story progresses.
at July 13, 2014 No comments:

I found this today on a friend's blog.  She is reproducing WW1 poems throughout 2014, some are very touching, some make you cry - but this one?  Well, it just hit the spot for me.
Socks


20 plain and then decrease.


He was brave – well, so was I –
Keen and merry, but his lip
Quivered when he said good-bye –


Purl the seam-stitch, purl and slip.


Hark! The paper-boys again!
Wish that shout could be suppressed;
Keeps one always on the strain –


Wonder if he’s fighting now,
What he’s done an’ where he’s been;
He’ll come out on top somehow –

***
Jessie Pope was a poet and journalist. She is best known for her patriotic motivational poetry
which was published in the Daily Mail newspaper during WW1. 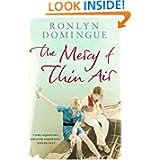 Time Traveller's Wife?  Lovely Bones?  Loved the first, disliked the second.  But if you liked either of them, I think you will find yourself drawn to this one.  This was passed on to me by a friend who's normal genre was murder, mayhem and detection and at first it seemed an odd choice.  But indeed it is a detective story of sorts whilst you, the reader find out a little more with every page about two quite separate love stories, seventy years apart, the protagonists within those love stories and how, actually, they may be more connected than it at first seems.

Raziela Nolan is a ghost who is inbetween.  She cannot let go and move on, so she exists, in spirit only, in the land between life and total death, observing, listening, trying to find comfort and completeness and the whereabouts of Andrew, the love of her life.  Seventy years ago she was deeply in love with Andrew, and when she died she couldn't pass over.  Her heart was broken and, in the real world, so was Andrew's.

This is a book to be read in large chunks.  You may find it hard to read as there are no chapter headings, just a little leaf motive to break up the pages ever now and again.  But if you treat those like the beginnings of chapters, they will serve you well.  The book is divided into three parts, and I do think that was unnessary, as things do not change from part to part, but, author's choice and all that.  You'll also have to get used to who is currently telling you the story - sometimes it's Raziela, sometimes the third person.  The time frame jumps too, but there are no friendly clues as there are in the Time Traveller's Wife.  This didn't put me off at all.  I was so intrigued by the style of the book, and so wrapped up in finding out why? when? how? that I didn't let it bother me at all.  I just got stuck in and enjoyed being part of an intriguing tale.
at July 13, 2014 No comments: 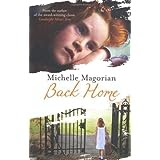 Back home for Rusty is....... well, just exactly where is back home?  Rusty was evacuated as a seven year old to the USA during WW2, and now, aged twelve is is back in the UK, a a house in Devon owned by  friend of her mother's.  And she wants to be back in America, where she lived with such a lovely, loud, talented family who taught her so much, and made her life a joy.  Now, with a silent and shy mother, Charlie, a new four year old brother, a father still absent in the Pacific; Rusty has to make that life hers.  But how difficult it is.  They have to return to  her father's family home, and live with Rusty's paternal grandmother, a woman who disapproves of Rusty's every move and of Charlie's too.  And when she is shunted off to a boarding school where no-one wants to be her friend - life becomes even harder.

This is a coming of age story, although the heroine, Rusty, is only twelve.  She has to go through a lot more than most of us to get to the point where she is happy again.  Magorian always writes of younger people so well, you forget that you are reading, and you find yourself in that world inhabited by people who have not yet found their place in life.  It reads like a dream, whole chapters go by and you keep turning pages.  It's a fine example of grownups not really seeing what is happening, and not really listening to what a child says (or doesn't say).

Last month's was a little early, this month's a little late.  What d'you expect, I have a life off the screen!  So for July - how about reading:


A book with a surname in the title