I was reminded of several American cult group deaths whilst reading this: the Jamestown massacre when the leader persuaded his followers to drink poison; the WACO massacre when the police were perhaps far too heavy handed; and another cult where the leader again persuaded his followers to commit suicide because the space ship  from their planet was coming to "take them home".

Those all happened in real life, and this book is a fiction.  However, one is quickly persuaded that there are characters out there actually larger than life, able to brainwash, if you like, those weaker souls who are looking for a saviour, looking for love in their lives, looking, just looking. 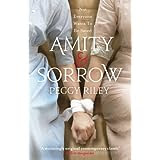 Amaranth was one of  those - the first of 50 wives of a charismatic man who was able to persuade all of them that he was their father, their husband, their God.  Her two daughters with him, Amity and Sorrow of the title, are disturbed children, even before finding themselves on the run from a fire in a car driven by their mother.  With various step backs to the time in the cult, this is much more the story of how a cult can keep hold of some people even when it seems obvious that they should be turning their backs for ever.

Written in a terse style, this one had me turning the pages fast.    Can't say "enjoyed" due to the subject matter, but a great read.  This is a first novel - let's hope she writes more.
at February 24, 2014 No comments:

Two covers here, the UK paperback is the top picture of peaches in a wooden bowl, and the American version seems to be the picture of Patrizia as a child with a little branch of rosemary (which I prefer myself).  Patrizia Chen tells the story of her childhood in a house with it's own cook, Emilia, who taught her recipes that never appeared in the family dining room;  her granfather disliking "peasant food" and opted for dishes that were white (or at least pale) and graceful.  When the author describes how she found out about the other kind of food, how to prepare it, how to cook it - I found my mouth watering!   A large house with garden in the middle of Livorno, on the coast of Italy, was her home, castle and playground, in the years following WW2.  Cooking and growing up are knitted together beautifully in this short (242 pages) book and if you don't read the recipes it won't take long to read.  But do read them! The tomato sauce is very similar to one that is cooked in this house over and over again for spaghetti; the aubergine and celery dish served at room temperature is something I've never heard of but want to taste, and perhaps a coffee granita with a sweet roll for breakfast?  Things change, we grow up, but good food is good food and stays in the memory for ever.

Just an old letter found in a suitcase....and that letter falls into the hands of the writer's grandaughter - she only knows this because they have the same (rare) name, and that can't be a co-incidence - even though the label on the old suitcase her father gives her to store things in says Mrs Sinclair. And certainly, the suitcase was her grandmother's.

The paragraphs do jump back and forward in time: the current time describes Roberta, the finder of the letter, who works in a second-hand bookshop and loves to collect the letters, notes, photographs and ephemoria left behind in those books and, in 1940/41, Dorothea who is in love with a Polish WW2 pilot despite being married. Yes, in case you didn't know, many Polish pilots helped the RAF out in WW2.

This is one of those novels that was deceptively easy to read. A little mystery because of a found letter is the story in a nutshell, but there is so much more to it than that. I found myself going back several times to re-read that found letter, which is what starts the book off. The letter is full of love and also bitterness and it offers a clue to something the reader will not know of until around two thirds of the way through. The pain of love, the ache of stillborn children, the way that love could change your life if you let it may lead one to think this is a light and frothy read - but it is not. It will stay with me for a long time - I loved it.
at February 14, 2014 No comments:

Valentonia - are you in, or out?

It's a few days hence to 14 February, that day in the calendar when, if you are a cynic, you will hear card manufacturers' tills ringing - kerching! kerching!   If you are a bit of a softy, you may well buy one of their cards yourself;  or you may make a few.  The heart, a great symbol for the day pops up everwhere.  I just thought you might like to look again at that symbol for Valentine's Day in a whole new light, so, roaming around Pinterest, I found a few "hearts" that made me smile,  and all of which I found a little different than the usual 14 Feb representations.  Enjoy!

or a red heart made entirely of stained glass..... 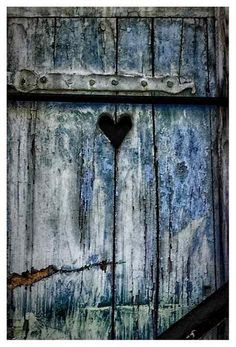 Read a book with a forename in the title, e.g.


And tell us what you chose. 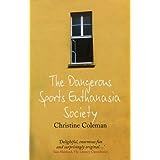 A friend passed this on to me.  She loved it.  And I found that I did too!  Whilst reading, I was reminded both of The One Hundred year old Man Who Climbed Out of the Window and Disappeared by Jonas Jonasson and The Pilgrimage of Harold Fry by Rachel Joyce, both of which have older central characters/protagonists. And I also asked myself this question.  How did The One Hundred Year Old Man who....... get to be a best seller and this one not?  Both start off in a similar way, in that the lead characters both climb out of a window in the residential homes that they live in and run off to have adventures.  Both are past retirement age.  Both want to "do more".  The former perhaps has more international appeal, the latter a rather English novel.  But so readable!

Agnes will soon be 75.  She has all her marbles, and good health.  She's also in good physical shape, having sneaked off to a keep fit class every week whilst living with her son and his new partner and family in a room that used to be the garage.  She's with her son because after the death of her vicar husband, she finds that all their savings have been invested in a totally useless cause, and there is no money at all.  It doesn't take long before Agnes becomes depressed; this affects her son's life and she is booted off to a residential home, where she lives in a beige room, having a beige life.

She dearly misses her grandchildren, who are now in another town altogether, their mother having found a new partner.  So she never sees them, and can't talk to them either because every time she rings, there is some excuse.  What is wrong?  Are the children safe?  Are they happy?  And then, the last time she rings, there is no answer.  Agnes decides to leave home herself and ensure that her grandchildren are OK, and forms a plan of action.  And that's when her adventures start.

The publisher, Transita, bill themselves as "Good Books for Grown Women" - that is to say, the characters are rather older than usual, and the books should appeal to women readers.... but there is no reason at all why men should not enjoy this as much.  It was easy to read - a well thought out story and although many of the reviews on Amazon with lower star ratings found the book had too many coincidences, I never saw that at all - for after all, isn't life full of them?
at February 01, 2014 No comments: