On the Other Side: Letters to My Children from Germany 1940-46 by Mathilde Wolff-Monckeberg

If you have read Few Eggs and No Oranges by Vere Hodgson (published as this one is by Persephone), a telling exploration of what it was like living in London during  WW2; you could do no better than read this shorter book which tells you what it was like living in Hamburg, Germany, at the same time.  Did you know that Germans were subjected to food rationing?  At the start of the war each person could expect 60grms semolina/oats, 125 grms butter per week - and 1lb meat/sausage per month - anything else, vegetables, eggs, fruit - would be what you could lay your hands on.  by the end of the war the meat ration had shrunk to 1/2lb per month, accompanied by whatever else could be found.  Did you know that as well as the near-total distruction of Dresden by the RAF, most of Hamburg, where Mathilde Wolff-Monckeberg  lived, plus many other large towns were also continually bombed until not very much remained?  For all those books (and there are many) written about life in WW2 in the UK from the point of view of housewives, soldiers, doctors, midwives, shopkeepers, children etc., there is very little available from the same point of view in Germany.  The Book Thief, a good fiction and one I recommend is one of them, but this is non fiction, and so gives you a real point of view.  From the radio messages in the early days of continued bombing telling Germany that "everything is going to be restored ever so much more beautifully than before" to the never ending tramp to the shelters every time the sirens sounded, wearing several layers of clothing in case your building was bombed plus any food you could carry for the same reason:  this was the hell that ordinary Germans too, lived with.

Tellingly, Hamburg was a town that was not supportive of Hitler and his ideas.  Towards the end of the book this mother and letter writer records her thoughts thus:  "Our beautiful and proud Germany has been crushed, ground into the earth and smashed into ruins, whilst millions sacrificed their lives and all our lovely towns and art treasures were destroyed.  And all this because of one man who had a lunatic vision of being 'chosen by God'.  May he and his followers be caught in just retribution."

"Tilli" Woldff-Monckeberg was an educated woman married to a professor of English, the stepfather of Tilli's children that were outside Germany during the war years.  She didn't write books, but every word of hers is worth reading - every word she recorded (in the form of letters to those children) were for the eyes of her children only but now they are here for us all to read, thanks to her youngest daughter, who discovered them, edited and published them in the 1970s.

You should look here  to read more, but don't let this little book slip under your radar.
at October 29, 2013 No comments:

When I listened to this quiet, unassuming schoolteacher from Georgia, I wondered to myself what she wrote, and what her style was?  So, as you do, I clicked on that button and bought Sleeping at the Starlite Motel. 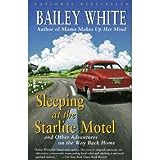 It's not a novel, but neither is it a book of short stories, although if you treated each little tale as a short story you wouldn't go far wrong.  These little "rememberings"; are they one hundred per cent true?  or is the truth embroidered?  It really doesn't matter, because all of them reveal a Southern way of life and even though I have never been to that part of the States, if I did, I would recognise it straight away! I loved finding out that her father was a Hollywood B movie scriptwriter, and that her mother spotted her father's feet in a ghost film!  I loved her tale of sneaking out of a computer training course and going off to the dog track.  In fact, for different reasons, I loved each chapter.  It's the kind of book you might read a chapter of each night in bed whilst dropping off with a smile on your face.  There is nothing to race to the end for, there is no gasp of horror as you turn a page, but for me, it was just a lovely find.

Forget about love as in chick-lit.  Forget about happy ever after.  Here is a small book, and inside it's pages you will learn of a love that is probably like many others, but unlike anything you have known.  In alternate chapters, Ruby and Jack Stokes tell the reader how they feel about each other.  Ruby tells the reader how she met Jack, how she settled with him and what she is doing now that she has been diagnosed with lung cancer.  Jack tells you that Ruby was the love of his life - for it is clear from the first couple of paragraphs that Jack's telling starts after Ruby has died.

Hard to say where and when the book is set, but that does not really matter.  Certainly the author lives in North Carolina, and I'd say that the book was set there, sometime in the 1940s or 50s.  What is necessary is that you read this short book slowly, so that you don't miss the beauty amongst the words.  Written in the colloquial style of the place they live in, it takes a little while for the rythym to click, but when it does, you'll get it.  And the last chapter?  read that slowly, because it involves three people's thoughts and is written in a stream of conciousness style.  Unless you have a heart of stone, I defy you not to be moved by this bitter-sweet gem of a book.