March (Marcheline) Murray, and her daughter Gwen, arrive in the small Massachusetts town March grew up in for the funeral of a woman who cared for her and her father after the death of her mother.  For Gwen it is the first visit; and for March it's the first time that she's come home in nineteen years.  She married a local boy and they made their home in California.  And now March discovers that the boy she lost, the love of her life in her teens until he left town and didn't come back is home, and owning most of it.  This lost love seems stronger than her marriage, stronger than her bond with her daughter, stronger than the strings of old friendships because he wants her back and somehow it seems that he can get her.
This is the kind of love story you don't want to experience.  The dark side of a man who only wanted March, and will do anything at all to keep her this time round.  The dark side of a violent character.  How many times have you seen a woman with bruises and thought "how did that happen"?  This is the first of Alice Hoffman's books I have read, and boy, is she a wordsmith.  This one is worth reading for the pictures in those words which conjure up feelings and colours and temperatures and  everything needed to weave a heartbreaking story about the wrong kind of love, but also the way families can split and reform in different ways, and about how the conduct of one person alters the conduct of another.  Truly a book you need to read.

She Went to War - Edith Pargeter 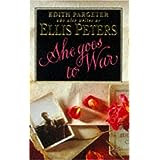 First published during WW2.   Catherine Saxon is the story teller - and in the form of letters, she tells her story to a male friend who is bedbound following injuries received during WW1.  She is a person who wants to do what's right, and in that to make the world right and be a person to be looked up to - and she did so hope that the world would put itself right after the war was over... pity.  I have to say that this little book was worth the read and, because it was based on Pargeter's own experiences, gave me a great insight into WRNS activity during the war, and also the way the population seemed to be able to carry on working and dealing with being bombed on a day in day out basis.  She describes the way that women have to bunk together, and guesses that men can do this better, but then just gets on with it.  So many little insights about her life and the life of other WRNS are contained in this excellent depiction of life during the early years of WW2.  It also had me in absolute tatters towards the end of the book when the end of Crete was described and with that end, the death of her lover.  If you can find a copy, I urge you to read this if you have any interest in Greece, why they feel like they do today, how hard they fought with nothing to defend themselves, and how many allies died because of the stupidity of those very politicians that she railed against, wanting them to be honest and far thinking but knowing that they were not - and of course are still not.