I am aware that I have neglected you all of late... and you've probably gone off somewhere else altogether!  So sorry, life has been busy, particularly at my dining table of late.  Why?  Well....

At some point in early December, I was delivering some unwanted clothing to the charity shop I support.  Usually Mr Mac does this job, but I happened to be in town at the same time as he was and I did the charity shop run whilst he did something else.  Because we are gift aiders (i.e. we pay tax and so any stuff gifted to a charity they can claim tax back).  So I said I was a gift aider and gave my postcode... "Mrs Mac!  Hello!   we hardly ever see you!.  Would you like to do some volunteering?"  "Well, no, I wouldn't".  "Not even an hour a week?"  "No, sorry".

She then went on to tell me they had stacks of old jewellery that needed sorting, cleaning, remaking.... and I said I would do it at home for her.  I haven't stopped except over Christmas! 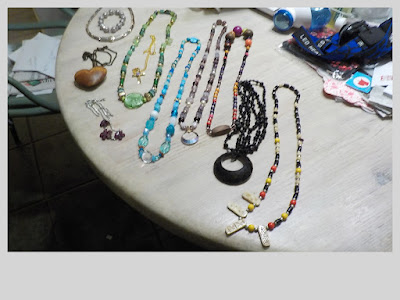 If I count the price tags I have used, I am up at  300+ items now, and a friend gave me years and years of accumulated stuff last week to add to it all.  As well as old jewellery there were two full carrier bags of loose glass beads of all kinds and sizes - nearly every one gone now - made into necklaces or  memory wire bracelets.

I have to say it's just the job for winter days when you are not going out and the sky is grey.  I've found no treasure, really, but I have made a lot of junk saleable - surprising what you can do by cutting up old dirty necklaces and using the beads in a different way.

That's not a good pic, but it's the only one I have currently.  All that stuff was made from other stuff except for the black necklace which I only had to wash in soapy water.

We are around 25 miles from Glastonbury, and the shop manager tells me that they sell loads of junk jewellery the week before the festival so I'm going to keep my eyes open when there are bits of the festival on TV, in case I spot one of my glorious creations!!
at January 29, 2020 No comments: