Several different kinds of love stories intertwined in this dual-time story set in Dorset.  Just after WW2 and the start of the 21st Century are the two time settings, but the characters remain the same except for those born after the early chapters.

Love of all kinds.  Love of the land;  love of a country house that costs so much to heat and keep standing that it is the catalyst for the breakup of a family.  Love of a woman, and the love of two men for that woman; love of music.  All these things contained within the pages of a book by an author I like a lot.

Certainly, after WW2 and on into the 1950s and 1960s, many of the country houses requisitioned for use during the war were returned to their owner with bits missing, badly damaged, some then unlivable in at all.  Use Google and you will find many country houses were just sold off or even blown up, so that the land could be used for building or farming.  For the war brought a real change in the way people lived.  The folk who had always worked in "the big house" and doffed their caps metaphorically (and sometimes for real) as the owners of said big house passed by,  had found that there were other chances for them at higher wages; and so only the older workers stayed on, doing the best they could.

A pot of tea on the lawn in the sunshine and The Song Collector would perhaps be enjoyable!
at April 21, 2018 No comments:

So - it's been a nice afternoon for gardening (well, mostly weeding!)  I have no idea what kind of weather encourages weeds to grow in certain areas but grow they do.  Curse the Romans for bringing in Ground Elder!  The roots spread for miles, and I hear they can go downwards that far too.  I have a long thin border up at the top where the car parking area is, and it has several good shrubs and hardy perennials in it; but I need to get weed smotherers in there too and at one end there is too much bare earth.

At the farm shop today I spotted rununculas.  Not weed smotherers, and certainly not perennials, but a cheery show for a short time in spring, so a bright read one came home and is "in".  I also had, ready to plant, 3 dark red saxifrage which should form a good size non-weedy clump, so they are also in.  Finally, the geranium below, which I bought last September.  The reasons for not planting about 20 poor souls at the right time are not going to aired today, but nevertheless they are gradually going in and (hopefully) spreading their roots and settling in.  This geranium, one of the rather wilder kinds, is a nice lilac pink, and blooms for a lot of the summer.  It will spread too, and apparently is great for naturalising under shrubs and is happy almost anywhere.  So in it went. It's flowers are rather bigger than they look there in the pic, although not as big as the flashy flower-show type. 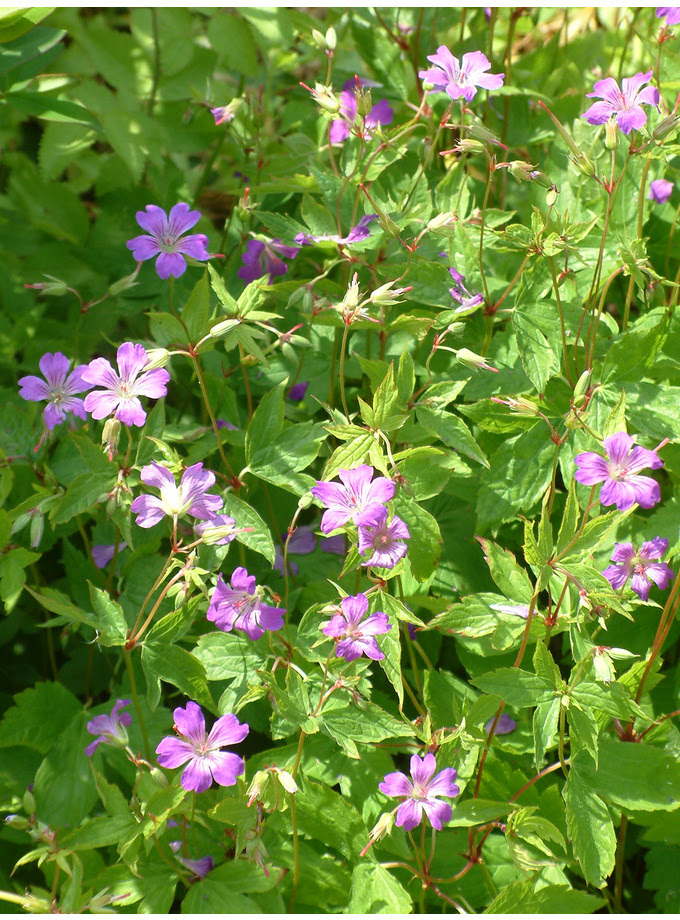 We are nearing the end of a four year remembrance period for WW1. Reading this book, I found it an excellent way to learn about a small part of that war as well as the early days of flight. Of interest to me as my father's only cousin and "best pal" was a flier in the RFC (Royal Flying Corps) and lost his life in that war.

This book covers a period from the turn of the 20th century until 1920 or so, and is the story of Della, a quiet mousey child, beloved by Ma, dismissed by Pa (after all, she is just another girl) and is "lost" until the return of Aunt Betty from North Carolina where she lived for many years. Whilst there she saw the early fights of the Wright Brothers, and because she can see Della's worth, takes her under her wing and teaches her the rudiments of flight by building kites with her, to fly along the beaches of Lincolnshire. As Betty has some money, she pays for flying lessons, and up there in the sky, Della finds her true self.  A fascinating section of the book shows her at air shows, here and in Europe (plenty of aviatrixes then) making some money, and knowing that flying is what she wants to do for all of her life.
And then WW1 arrives.  Women will not become fliers for their country.  They need to be at home, keeping the home fires burning. People die, hearts are broken, and the best Della can do is to be a motor mechanic working for a woman who's husband and son are both at war.  And there is a marvellous love story here too, for those who like them, though it does not detract from the tale but only enhances it.  And - there is just one big adventure still to come.


A wonderful book with a female heroine - and heroine she is, learning to fly when women should know their place, which is at home and certainly not in the skies . Don't forget the Author's Notes, where she points out how few female pilots there are, even in  2017.  She also has lots of info about avaitrixes at the time depicted in the book.   Research for this? Impeccable. Knitting this together with fiction? Fabulous.
at April 13, 2018 No comments:

And now for something completely different.  This is a fairy story for grownups. It isn't a children's book. But it's about a child. A child who was abandoned at the Lost Property Office, Liverpool Lime Street Station, and is brought up by the manager of said lost property office. A religious Zealot, she ensures that the child is too frightened ever to leave the station, to have no friends, and to believe that the devil lives in the cellar.   When she, whom the child refers to as Mother with a capital M, dies one afternoon,  what is the child to do?  She is taken under the wing of Elisabeth, who runs the cafe and cake shop next door.  At sixteen, the child can actually take over her Mother's job (in fact she has been doing her Mother's job for several years already), but not without papers and a National Insurance number.  What to do?

The book is a hymn to Liverpool - the city and it's people, to the Beatles, and to the kindness in some people's hearts.  Little bits of Liverpool history are tucked away in the text, and are fun to discover.  And with  just a touch of magic realism in there somewhere though a rather slow start, all in all this  is worth pursuing.