Yay!  Summer's coming.  Although if you divide the year up into four using the correct dates, not yet.  Not until the 20-something of June, anyway.  But at Pine Tree Cottage roses are out, the buds on the day lilies are formed, and today the phlomis started to flower - lots of other stuff out already too.

So.  Reading.  What will we read in June?  Let's break out, friends!  I suggest


A book originally published in another language


so here's what I am going to read - a book sent by a friend, languishing unread for too long:


I have no idea why I never show you the cover when I do my monthly suggestion.  Here's the UK paperback cover, and there are loads available for 1p on Amazon if you want to read it too.
By the way, I read Just William (see last month) and it made me smile - the naughty boy!

Checkered skipper or not? Butterfly in a Dorset garden May 2019

This is a Checkered skipper and I cannot find a picture of any small brown butterfly that looks more like this from it's markings both under and on top.  However, the furthest south his has been re-introduced after a total failure is Rockingham Forest which is nowhere near the coast in west Dorset.  So.....?
I didn't take this pic, and I never have a camera with me when I spot something interesting.  I took note of this little fella because the underwing markings were very pronounced which is often not the case.  However, those markings were darker than the Checkered Skipper pics I gave found,  So did I see this, or just something very similar?  By the way, it wasn't a moth.

Every so often, a book comes along that is a little different, and it begs to be read.  I found out about this one from a short comment by a bookie friend, which was closely followed by a similar comment from another bookie friend!  Neither of them read many of the books I do and both of them read far more than me a month, but I always read their comments and sometimes a book pops up that I think "I'd like to read that!".  So this one eventually arrived through the post, and it was added to the pile of books near me for reading quite soon.

This is history observed by a dog.  The dog talks to us in human terms although humans only hear the bark, of course.  But what a tale he has for the reader.  The book is called Tomorrow - and the dog has many tomorrows to come because he is several hundred years old, and as the book opens he's in Venice on the steps of St Mark's Cathedral waiting, as he was told to do, by his master who disappeared 127 years ago.  Is he dead?  maybe, but maybe not, for if the dog is that old, some magic appears to be happening.  Suspension of belief has to be employed, but that was easy for me.  I dipped in and was hooked.  Another character in the tale thinks the dog's name is  Tomorrow, but actually, his master usually refers to him as "my champion" and really, it is not important that we know the dog's name - it is much more important that we find out why he is so old, and of course, where his master disappeared to.

This is not a children's book.  The only group I would offer this to are those who are open-minded about book settings.  After all, this is not the mysterious death of an office worker, the mysterious disappearance of a husband and all his money, the attempted murder seen from a train. This is a wonderful adventure - from the new cathedral in Venice; the Ice Fayres on the frozen River Thames; and onwards through several hundred years of bloody European history, a time when it seemed that everyone was at war with the country next door.  Descriptions of deaths are many - some are dogs, some human;  horrific battle scenes leave nothing to the imagination, and through all of this our canine hero searches for his master.

I'd have read this all in one go, but real life does muck about with doing what you want to sometimes, but I managed to read this over 48 hours, and loved every moment of the adventure, moved to tears twice during the reading of it.  It reminded me of The Night Circus, not in it's style or narration, but because that was also a book where if you suspended belief, you could enter into a truly different realm.

Upcycling/recycling/shop your house - I did!

About 4 years ago we bought a piece of second hand furniture with the aim of revamping it.  Even bought some paint.  It sat in our dining room and sat there, and sat there.  It got filled with the bits and pieces of life.  It got covered with keys, books,  pens, receipts, dead batteries, and general tat (or tringum tramgums as Mr Mac would say).  Fed up, want it gone.  But what to put in it's place?

So.  I am revamping our bedroom.  And next to the bed stood an ordinary pine tallboy that was bought 26 years ago as a "just for now" piece of furniture.  Got it downstairs and decided it would go where the other piece of furniture stood very nicely, and  all the trimgum trangums could go in the drawers. 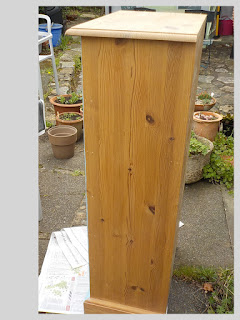 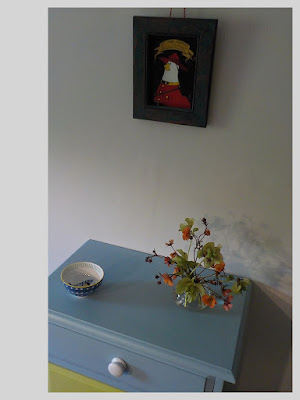 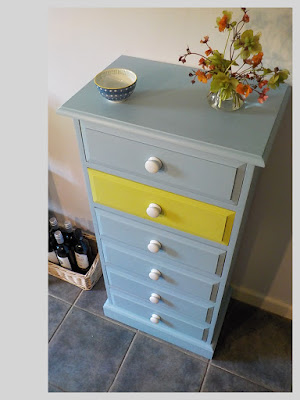 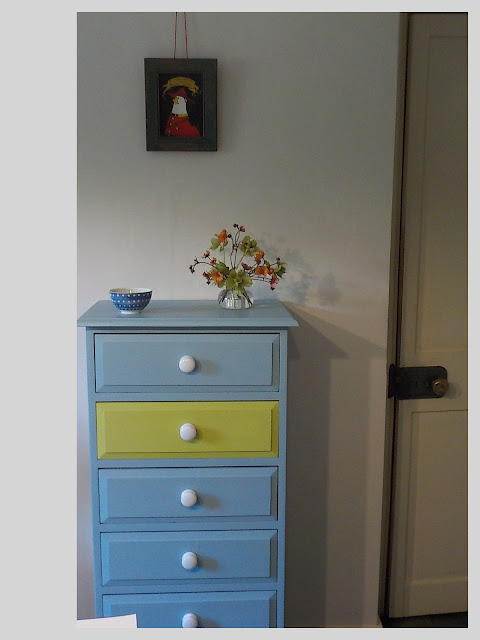 So it's many thanks to Mr Mac who cleared the original item of furniture out (and found some lovely wine we had forgotten all about!). and then went about putting all that stuff away in the drawers.

Also, in case you were wondering about the little portrait above the tallboy - that's an oil portrait of Sergeant Reggie Cockspur of the Royal Canadian Mounted Poultry.
at May 09, 2019 4 comments:

I took a quick whirl round the garden to show you what was about this morning.  It's sunny and cloudy by turns and the wind is cold, but there are all sorts of lovely things to share. 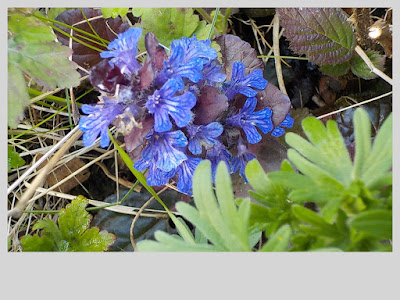 Ajuga Reptans "Braunhertz", common name Bugle - it had struggled to show itself in a small bed which needs completely digging out this year as it's full of brambles.  In the same bed is a rose with a spreading nature (Nuits de Young) and I must save that - dark dark red with an overpowering smell - a really old rose. 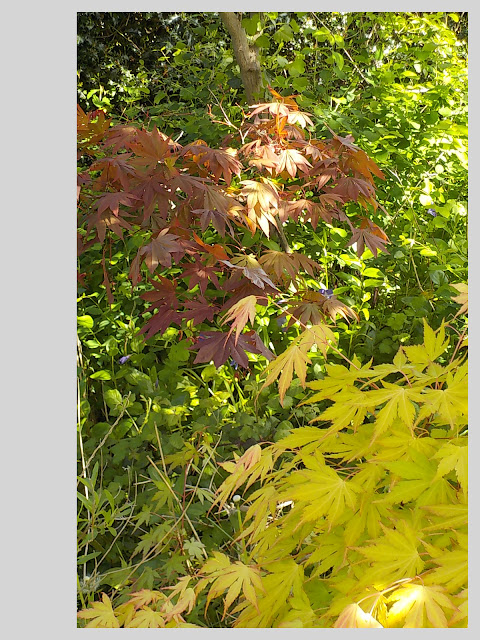 Here are two of the four acers planted together to make a shady little grove.  It's surprising what you can get into a 100ft plot to make it interesting! 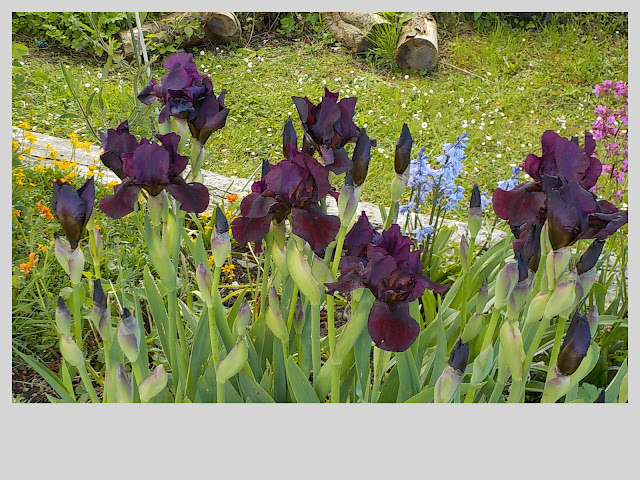 This is my current favourite - these iris, planted three years ago, have grown from a little patch producing 3 stems last year (and slugs got 2 of those before flowering) to this.  I reckon at least 40 blooms this year and what a colour!  Obviously happy here surrounded by egg shell and pistachio shells (and of course not much wet  weather so no slugs currently).

And below is a miniature lilac -possibly Syringa Meyeri Palibin - it has a weeping nature, and this is only 3 ft high with a spread of around 4ft  after 15 years.  Not much perfume either, but a joyful spring blossom and this year is it's best ever. 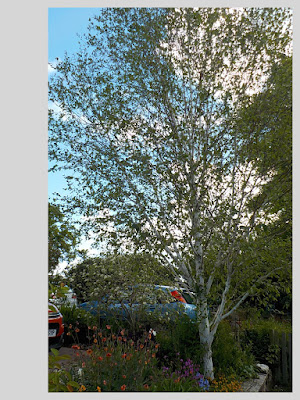 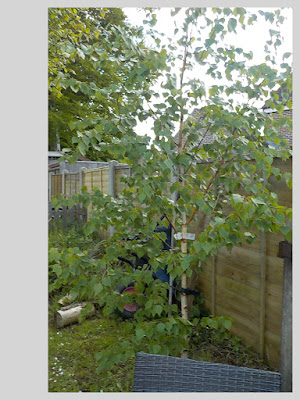 Two silver birches, one an upright, 16 years old and over 20 foot high..... and for the very first time hundreds and hundreds of catkins (usually about 50) It was beautiful until a gale force blast took the entire lot off overnight.  The other is a slightly different form and only about 4 years old.  I feel I must plant trees to eat the carbon monoxide.... we live on a main road, and anyway, people are always chopping down bloody trees and not replacing them. 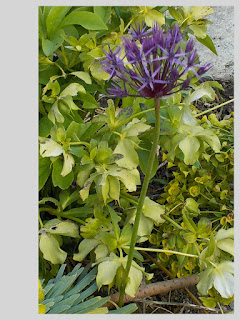 And finally an oddity.  From a dozen Alium bulbs, planted 5-6 years ago, this is the one and only flower.  And no, nothing ate them - all the green comes up, the stems just don't form so I felt lucky to get this one.

Ooops! Mrs Mac Suggests - What to read in MAY


I have to get hold of and read a Just William tale.

William's adventures are just perfect (or shouldn't that read perfectly naughty?), even though written many years ago - The author captures a child's thinking so well - particularly as he's a boy and a naughty one at that!  So this month, can I suggest that you give yourself a treat and find a copy of  one of these funny books, the first of which is