The Brief History of the Dead - Kevin Brockmeier

This was one of those "I really must get round to reading" kind of books, and I had no preconceived ideas before I read it, choosing to stay away from reviews and lengthy, in depth articles about the subject matter.

The inhabitants of a city.  How did they get there?  How come some people know each other but others don't?  The population ebbs and flows - sometimes the city is so large that you can't walk to the other side in day, and at other times, whole neighbourhoods become empty and run down. Because this city is a place where people go after death, and they can stay there all the time that a person still alive has a memory of them.  This of course may mean that they have another whole lifetime to lead in this city, but some disappear within days of arriving.  Back in the world of the living, three Americans are in Antarctica, supposedly researching whether it's feasible for  a major soft drinks manufacturer to take polar ice and use in in the manufacture of their product, and therefore advertise it as being made with truly "clean" water.  And then things start to go wrong, and the single woman amongst the three is left alone for what seems a rather long time.   How these two worlds link up is indeed the brief history of the dead - a new and altogether fascinating journey.  As I closed the book I found myself disappointed in the last page or so of the book; but, given a while to think about it, I changed my mind and realised that it was exactly the right ending.  Whatever your views on life after death (or not, as the case may be), this will give you some definite food for thought.
at July 10, 2013 No comments:

The Whole Business with Kiffo and the Pit Bull 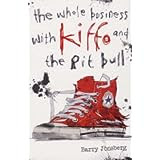 Never judge a book by it's cover..... isn't that what they say?  Well, maybe, but not in this case, as the Converse All Star depicted on this cover has a staring role in this one.  Calma is a teen with large breasts, glasses, and a great imagination.  Her Mum works two jobs because her Dad ran out on them years ago, She loves to learn but is always amused in class by the one pupil who can stop any teacher dead in their tracks - one Jared Kiffing, or the Kiffo of the title.  He, and the rest of the class have managed to get rid of several in their time - that is, until they get Miss Payne.   She's big, ugly, and brooks no arguments.  Kiffo hates her, and Calma thinks he has every reason to do so, and so they turn amateur detectives, staying out all night and stalking Miss Payne and her dog.  She does some strange stuff, stuff that looks as though it might be the other side of the law.

Calma is writing this book, and that imagination of hers can get her into trouble, although she may make the reader laugh!  But woven through this story is great pathos and a back story that you will find out about in dribs and drabs.  Brilliant depiction of lives going wrong, and kids who feel there is no-one they can turn to except their friends.

Older children and younger teens is, I think the market this book is aimed at, but as an adult I found it easy to read, and it's another book that has insights into the mind of a child.
at July 07, 2013 No comments: 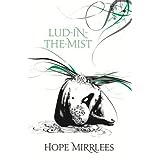 Well, well!  I am not even sure how I heard about this one,  but it took my imagination enough to buy a new copy..... rare for me these days.  Neil Gaiman fans may like to know that Neil Gaiman thinks this is "....a little golden miracle of a book".  It is a fantasy, but unlike any fantasy novel written in the last 50 years.  It put me in mind of The Lumpton Goblings, which I retain on my shelves and will now have to re-read;  and the style of writing reminded my of the late Elizabeth Goudge (Little White Horse, Carnagie medal winner 1946).  First published in 1926, republished in the 1960s and still around.

Lud-In-The-Mist is a small, self-important harbour town in the country of Dorimare, whose inhabitants are referred to as Ludites..... The Mayor of Lud (and therefore the most important person in the country) is one Nathaniel Chantacleer, he too is self-important and moves socially within a group of town worthies and burgers who know each other well, tell the same old jokes, swear the same old curses - and life goes on as it has for many years, with the town worthies studiously not mentioning fairies - and there lies the problem!  For they do exist, somewhere over the hills to the west;  and when the also unmentioned fairy fruit is eaten by certain members of the population, and Nathaniel's son is packed off to a lonely farm for safety things start to go badly wrong for those worthy burgers.

As I started to read this, I was taken into Lud-In-The-Mist immediately, I understood the town, it's worthies, the fear of faerie and therefore the studied ignorance of it; and was enchanted - which is as it should be!  Each of the major characters has their own flaws, a few of them are worryingly dislikeable and we find out why as we read on; an unlikely hero emerges and it's altogether a lovely fairy story for grown-ups.
at July 06, 2013 No comments:

shabby chic mirror makeover in an hour, with a little hard work....

I have some plans.  In about a month, we are having a summerhouse delivered.  What to do inside?  Well, I have those plans, but from time to time I have to do more than just plan.  I found this little old mirror in a secondhand shop.  Cost very little, but loved it because the mirror backing is marked and starting to go - and I love that imperfect look.  So this afternoon, I spent an hour in the garden.

Sometimes, out there in blog-land, you come across a little gem - and that's amazing, considering the amount of bloggers we are, around the globe (I guess millions!).  Here is an African American woman who, amongst other things, gardens.  This post at Sho'Nuff Sista's Guide to Organic Gardening is that gem - I smiled and smiled and could just imagine it all, which of course, is the sign of a good writer (she's a gardener, but maybe she sould take up writing!)    Take five minutes of your day and go there.
at July 04, 2013 No comments: