Just a little makeover for someone who wanted it.... 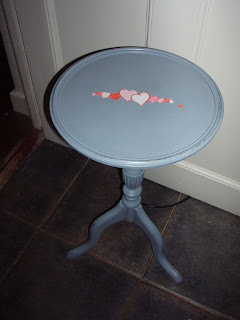 There is no "before" picture here... as it was just a little brown three-legged table, and I didn't think it was necessary.  Anyway, picture no. one is the table after being done over.  Pale grey (I know it looks blue) and she asked for shabby chic, so you can see areas where it has been 'worn' by use, and then she asked for a small bit on design somewhere on it and she likes hearts.  So...... 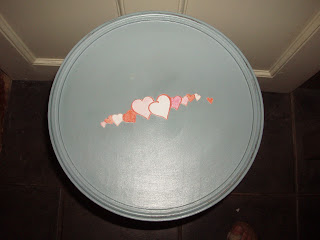 There's the top, complete with hearts.  Its for someone in my LETS (Local Economy Trading Scheme) group - how to make the world go round without money!!  I'll charge her in our local currency, which is NETs - so 15 Nts it is!
at November 30, 2011 No comments:

Shermouse Holmes back with tail between legs

Despite his announcements that he would find the truth - the once great detective Shermouse Holmes and his travelling caravan have returned home.  He has been searching for a body, and that body is obviously missing for good.  Your reporter recently gave details of an interview with the woodmouse twins, who were witness to the removal of the body but Mr Holmes was not enamoured with small boys, and ignored their tale.  Now he is home with a swift "No comment" in reply to every question and the budget for the local police force (who employed him in the first place) is seriously overspent.  And in a recession, too!

This is the very same police force who now say that they have enough evidence to put Fred Maclean away for a long time.  This announcement followed the discovery of a dried woodmouse body behind the woodburning stove last Friday by one of the "big ones" at Pine Tree Cottage whilst running the dastardly dust-sucker all over the floor and in the secret areas.  The body was sucked into the tube, but was just too big for the implement and was therefore removed by the lady of the house.  Sadly, there was nothing to stop her putting the body in the bin, and so no funeral could be held nor could the body be identified.  There have been a lot of harvest mice visiting this last Summer, so he was probably just a Summer visitor.  All the same, we believe he deserved more.

We also believe that there is no proof that Fred Maclean killed this little tourist, as there is a Mabel Maclean residing at the same address, and no-one appears to have seen the live mouse, or indeed a dead body being taken into the house by either feline.  So we are at a standstill here.  However, the police are confident that he (Fred Maclean) will eventually be caught in the act (although your reporter has his doubts).  As to Mr Holmes - will his career ever reach its former glorious heights?  When he asked me to go easy on him during this final report, your reporter made his excuses and left.

Never read any Susan Hill before, and never had the inclination - but have read this and its brilliant!  A wonderfully melancholic feel to every page, and a question in the air all the way through.  I read it in one sitting - and that's probably the best way, and thoroughly enjoyed it.  Adam is a dealer of antiquarian books, and has a small collection of his own, which threaten to take over his living space.  On his way home to London one evening, following a meeting with a client, he loses his way and finds himself on a narrow country road unable to find the fingerpost to tell him how to get back on the main road.  He sees a name sign for a house, and decides that where there is a house, there will be people, and people know the local roads, so they will be able to re-direct him.  But the house is empty and derelict, the garden is badly overgrown, and suddenly, he feels the hand of a child in his.......How he deals with the little ghostly presence, and how his life is turned upside down is told in his own voice.  The small hand is the ghost of ..... ah!   Don't let me tell you, get the book to read and see if you like it too - with its final shocking end.