Emmie and Bunty are the closest of best friends.  They share a small flat at the top of Bunty's grandmother's house  in London.  The year is 1940 and Emmie wants to be a journalist, particularly a war correspondent - working as a typist for a solicitors' office is never going to get her anywhere, so when she sees an ad for a job in the very newspaper she reads it in, she applies immediately.  After a rather strange interview she is thrilled to be offered the job.  But she didn't ask any questions, and it turns out that the job is actually typing for the Agony Aunt (Mrs Bird) of a magazine in the same group as the newspaper, and with a very low circulation, things don't bode well.

But she makes new friends, and despite the fact that Mrs Bird should never have been given the job of agony aunt (she has a huge list of subjects that she will not discuss, will not answer letters containing, and will drop straight into the waste paper bin despite there being a stamped addressed envelope from the writer) Emmie begins to think that she could help some of those women who have written.

Between her job at the magazine, and her three nights a week on the switchboard of the local fire station, Emmie and friend Bunty have time to discuss Bloomin' Hitler; go dancing; put the world to rights, and from time to time spend the night in a nearby bomb shelter.  But things are going to change.  This is wartime and some of the things they experience are, well, not very nice and hard to deal with.  Bunty is in love with a local fireman who risks his life every night attempting the put out the fires and rescue people from under the rubble of bombed out building whilst Emmie has just been "let down". But life must go on.  Tragedy will rear it's  head as it must, but as the book changes from light-hearted to heartbreaking, Emmie will do her best - after all, there's a war on.  This is the author's first book.  I'd like to read more!  Recommended.

The Best Kind of Snow for Grown-ups..... 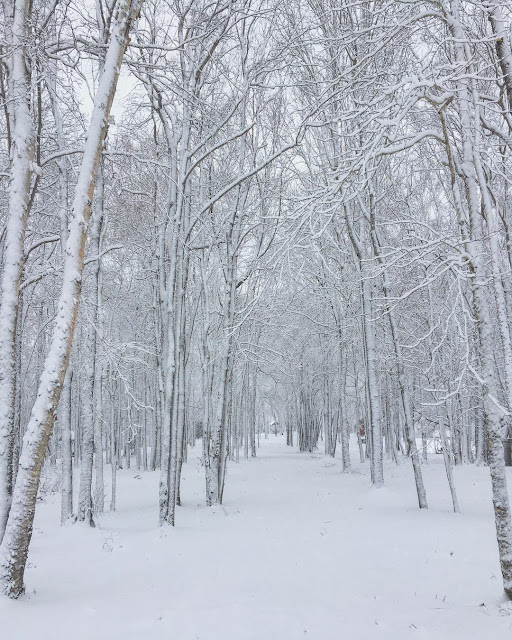 ....is somewhere else!  Well somewhere in Canada actually..... but so beautiful, isn't it?  And my fingers are not getting frozen, nothing is turning to slush, and I am warm and dry.


So here's Seasons Greetings to everyone, and of course,
a better New Year than last.
at December 21, 2018 No comments:


It's not often that I buy a newly published book, as my shelves are still full of books yet to be read; friends pass on books they think I might like and I spot books in charity shops that "look interesting".  But on a recent visit to a book shop looking for presents for others, I found two new books that looked interesting enough to buy, and this was one - it's a good one.

Joan Grice is the Wardrobe Mistress.  Her husband of nearly 30 years, a Shakespearean actor of some reputation, has died and she is bereft.  She is the permanent Wardrobe Mistress at a small theatre, and must return to work. At home she she has the same job, for Charlie Grice was a snappy dresser, and there is a wardrobe full of his clothes  for her to cry at, to inhale his left-behind smell of, and to generally grieve about the man who is never coming back.  The year is 1947, that long-gone cold winter, and the understudy who takes over Charlie's part as Malvolio in Twelfth Night is poor, shabby and ill-dressed for the cold weather.  But..... he is Charlie Grice - how did he pick up every movement, the posture, the wobble in the voice? At first, Joan believes that Charlie is attempting to "come through" from the other side, and is drawn to the actor.  But of course, as Charlie is definitely dead, perhaps some of those lovely clothes can be passed on.  And then, one day, she finds a small item in a coat that will turn her world on it's head.

I saw recently on Goodreads, a review for a book with a comment that the reader had been "searching for months for a good WW2"  novel.  In another place, a small group of people including me,  who used to swap books have listed books that they thought worth recording as WW2 reads.  We also have a WW1 list and a between the wars list.

It's easy on the Internet to find a synopsis for any of the titles, so be my guest.  I   have read several of these titles, but am not going to recommend any because there are so many different kinds of books listed here..... but I have marked one in red as I have read it and would recommend to anyone who wants to know what life is like on the other side.... these were letters written to her children by a German mother.  Also have marked one in grey/blue as it was just fascinating!!

Help yourselves to the list.  Copy and paste or whatever.  If you love books and you love a list, this is a little present from Mrs Mac!!

(Hill Farm Nan, if you see this, and you email me your address, I will send you my copy of Can Any Mother Help Me?  which I think you may enjoy) x)

Mrs Mac Suggests - what to read in DECEMBER '18

Got any snow?  Here in the south west of England it's raining (again) - so what can you do except do a bit of Christmas decorating, and have friends over for lunch!

And then there's the reading!  This is a busy time of year for some of us.  How to fit in several more books before New Year's Eve is the question  on my lips.  So my suggestion for you is a light book, a funny book, an amusing book (and a short one!!)

I've pulled out of the pile

One I found second hand (preloved) and the author's name amused me enough to pick it up.  It's

Jammy Dodgers on the Run - Bowering Sivers
at December 01, 2018 No comments: