Not the Forth Bridge, which it has felt like sometimes.  When we moved here some years ago, we bought an oblong IKEA table, the biggest one we could fit, as we sometimes had 12 for lunch in the early days here.  But it proved to be too big, so after a year or two, we took 9 inches off the width which proved perfect, as people could then get out of seats and do stuff, rather than being trapped for the entire meal!

But I always hankered after a round table, and finally, we found one, second hand, a badly stripped G-Plan with drop leaves.  Got it home and ... problem.  We have a tiled floor and the table was too light.  Consequently if leaned against, it slid off and away!  Sold it to my sister for half the price paid, and she is carpeted, so it's been perfect for her.  But still no table!

The third table was a real bargain in a sale, it started square, but had a "butterfly" in the middle, which extended it to much the same length as the old IKEA table. Got it home, used it once and decided I hated it.  Why would I do that?  who knows!  Anyway, eventually I owned up to hating it and the hunt was on again.  And then, one day........ there she was!

So.  Some hard work, but really, a pleasure to get it ready for our own refinishing.  Should I paint the top?  I thought I might.  Perhaps some watered down emulsion so that you could still see the grain of the wood?  How would that stand up  to constant use? -  for as my friend in Nova Scotia says - "your dining table is Mac-Central - everything gets done there"!!

Ultimately, we found that we owned a whole tin of OSMO  Polyx Oil for floors.  Said to be hardwearing, I slapped a thin coat straight on the table top.  Ooops!  Dries within 24 hours it says on the tin, so no using the table tonight,  maties!  And no using it after the first 24 hours either, as I did a second coat.  But it was the right thing to do.  We love the colour.


It can be done then - it has been, and I have the round table I've wanted for several years.   We also took six dining chairs to the sale rooms, because we had already taken them out of the dining room as they looked really bad with this table (just no kind of match at all, and just wrong).  We already had the four white chairs in use, and as these are cheap copies of the real thing, we can bide our time until we find some for "keepers" (or not, remember this is the fourth table!!). 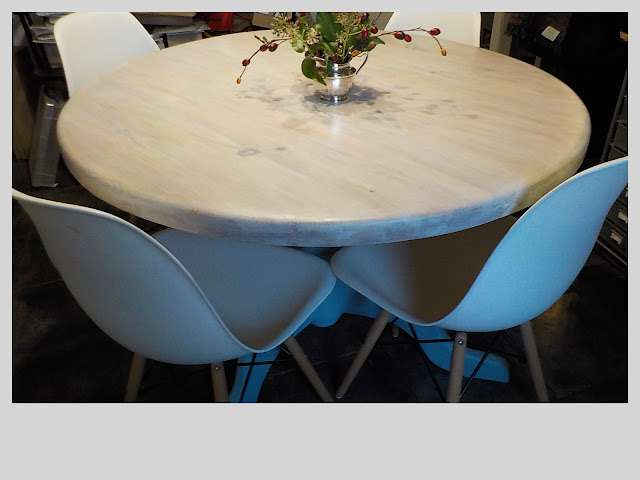 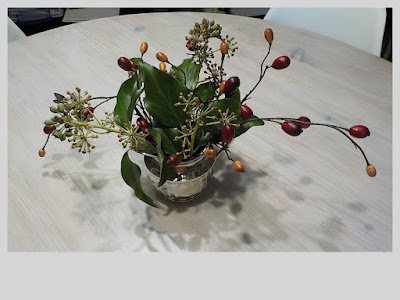 As it's nearly December, I just did a little something with ivy and rose hips for the fun of it!   Well, that's the tale of the fourth table.... and I guess I could say Everything Comes to He Who Waits, couldn't I?  Nah!  I'll just say  that it makes me smile every single day.
at November 26, 2018 No comments:

A short but superb novel set in the three years before World War II about little people. You know, those anonymous folk who live through enormous world events but are unknown, unseen, unsung.

Franz is just 17 when he leaves his Mother and his tiny home on a lakeside in Bavaria to take up an apprenticeship with a tobacconist in Vienna. The year is 1937 and in a few months Germany will annex Austria - and things will change for ever. He's only ever read the monthly local paper until he arrives in Vienna, and the Tobacconist makes sure he reads some of every newspaper on sale. Boring, yes, but he does get to absorb the news, and the closer to Germany's take-over, the more we, the reader,  see what is happening. He meets Sigmund Freud; he falls in love with a bohemian girl, and trouble gets ever closer.

The book, original published in German, has been translated to English.  I don't speak or read German so never read it in the original, but there didn't seem to be any slip-ups here (as there are sometimes in translations), so full marks to the translator Charlotte Collins.

Sometimes a change is as good as a rest!

Every one of the books I have read about the two world wars, whether fiction or not, over the years, has educated me in a way that school never could, and in any case, the years I was at school,  "history" was something that  had old kings and queens in it, and something called strip farming, oh! and the Romans.  Thank goodness I am interested in things and always want to find out more. ( It wasn't until I watched the complete series of The World at War, narrated by Sir Lawrence Olivier that I knew anything about WW2).

This one came into my hands about a year ago as a birthday gift from a friend.  I purposely saved it until this year so that I could read it around the time of the 100th anniversary of the Armistice on 11 November 2018.

The book describes a very small part of WW1 in letters, not to family or friends, but to the same employer, The Leathersellers Company;  one of the City of London's ancient Livery Companies.  The author (Archivist for the Leathersellers) found, in amongst personnel files in the the archives, some letters written on flimsy paper, and all addressed to the Clerk of the Leathersellers.  It become clear very quickly that these were letters from the front line sent to the mens' employer - who, incidentally,  kept their positions open if (with luck) they should return from war, and also sent half pay to either their wives or families for the duration.

War has no fascination for me, a peace loving woman, but somehow, politicians and their supporters of all colours and creeds seem not to be able to make (and keep) the peace for long, anywhere in the world.  However, this is not a book not about defeating an enemy, but about how it felt to be a serving man who only went to war for love of country and in the hope that he could perhaps have some effect on the shortening of the ghastly affair, this is worth taking the time to seek out.  Three different stories about the lives of three different men - fascinating, haunting, and full of facts that I didn't know but am glad I do now.

I guess that public libraries would be the place to go to get hold of this for a read, as I see that Amazon has only  secondhand copies currently.  All proceeds are to go to the British Red Cross, so perhaps worth contacting the Leathersellers themselves if you want to buy one.

Mrs Mac Suggests - What to read in NOVEMBER '18

Autumn is well and truly here then.  Gutters full of fallen leaves, cold winds from the North, and yet somehow the sun still comes out and cheers us.  And in a few days, on 11 November, we will think about remembering that it is 100 years since the end of the First World War.  A war which really could have finished a few hours earlier.... except that politicians thought it would be a nice idea to round the date off.  Really?  Yes really.

My suggestion then for a November read is something you may never have thought about before.


Read a book about, or set in, World War One

I have a very special book set aside for this one.  Written by a friend of mine who is the historian for one of the City of London Companies (The Leathersellers), it tells of the war primarily via a very different channel - letters sent from the front to the soldiers' employer..... not, not a wife, a father, mother, lover, child, but to the Leathersellers.  There is a great deal of small life history between the pages, and many photographs.  The book is
This Ghastly Affair - Jerome Farrell

All sales proceeds will go to the British Red Cross.
at November 01, 2018 No comments: