About two months ago I lost one of my oldest friends. Someone I had known since I was around 15 years old.  I had wanted to put something on my blog, but found it hard to express what the loss felt like to me.  And then, today, I found an extract from Anna Quindlan's new memoir/autobiography, and it fit the bill.  And yes, everything she says is correct.  Old friends -  they know you.  They remember things.  They have grown older along with you.

Old friends are not necessarily best friends.  But they are friends who hold part of your past and so they hold part of you.  And when they die, a little part of you dies too.  I remember a very elderly relative saying , aged one hundred and one...... "everyone I knew is gone.  There is no-one left that knows me now".  Not quite true, as of course there was still some family members left, but I understood the sentiment.  So thank you Anna Quindlan, for your fitting words:
“The thing about old friends is not that they love you, but that they know you. They remember that disastrous New Year's Eve when you mixed White Russians and champagne, and how you wore that red maternity dress until everyone was sick of seeing the blaze of it in the office, and the uncomfortable couch in your first apartment and the smoky stove in your beach rental. They look at you and don't really think you look older because they've grown old along with you, and, like the faded paint in a beloved room, they're used to the look. And then one of them is gone, and you've lost a chunk of yourself. The stories of the terrorist attacks of 2001, the tsunami, the Japanese earthquake always used numbers, the deaths of thousands a measure of how great the disaster. Catastrophe is numerical. Loss is singular, one beloved at a time".
This extract is from

Lots of Candles, Plenty of Cake
by Anna Quindlen
at July 24, 2018 No comments:

Peet's last book - unfinished before his death and tidied up and finished  by his friend, author Meg Rossoff.  Well I liked it - a lot.  But be warned, it is a rather dark story.  Some of the low score reviews on Amazon seemed to miss the point.  Or rather, they seem to have been written by persons who don't keep up with late 20th and early 21 century news.  For hundreds of orphans were sent from the UK to both Canada and Australia - to help ease the burden on state coffers one supposes.  And some of those children were abused by the very people that were supposed to help them.  The trick was that they were told they would be sent to new homes, where they would work, but be loved and fed.  And some  were.  A lot were not.....


Beck is one of those orphans, his father gone, his conception the result of a quick coupling for money following the loss of a job by his mother who desperately tries to look after two parents addicted to "patent" medicine of some kind and her own brother, mentally handicapped and locked away.  When they all die in the Spanish flu epidemic, Beck finds himself in an orphanage.  Being of mixed race parentage, no-one wants to adopt him, and so here he is, on a ship out of Liverpool bound for Canada, where he will find himself in the care of the Christian Brothers.  If you do not know who you are, or what is expected of you, you will lead a life of confusion, and that is  exactly what Beck finds in the "care" of the Brothers.  Beaten and raped for a misdemeanor not of his making, he is passed on from the Brothers to a farm to help out.  Watching the family eating good healthy food whist he is just offered bread and the gravy from the stew he is lost.  What to do, how to do it, where to go?  And so, just a year after leaving Liverpool, he finds himself running with nowhere to go.  But go he must, and he will have many other adventures.

For a small reading group who read a "classic" monthly, we picked this lovely children's story which I had read in my childhood.  It was such a pleasure to read it again, especially as I only remembered
the outline story.

Mary Lennox has been sent from India to Yorkshire, to her uncle's home, Mistlethwaite Manor, on the moors.  Mary is a bad tempered child, using to having her own way with the Indian staff in her home, and frankly neglected by her parents, who are disinterested in children in general and their own in particular.  Fate takes a hand when an outbreak of cholera leaves her orphaned, and the hand it deals her doesn't seem much better when she arrives at Mistlethwaite to find that her uncle does not want anything to do with her either.  It's winter; it's cold and she has no-one to give orders to - for the staff of the manor house are not showing her any respect at all!

And then there are the mysteries - first, some walls around a part of the garden which has no entrance; and second the noise of a crying child, which all the staff deny hearing.  Gradually Mary makes friends, and this becomes the story of three children, who will each take a delight in being alive.

The vocabulary may be a bit dated, but then so is Dickens, and people still read him.  Go on, get a copy and treat yourself to a spot of Magic. 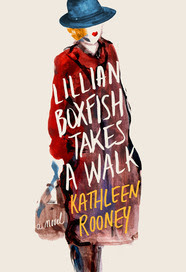 Lillian Boxfish is spending New Year's Eve 1984 walking the streets of Manhattan and at age 85 or thereabouts, it might be good exercise, and it might be a wee bit dangerous.  It definitely will be a time for her to tell us about her life as not only the highest paid advertising woman in the country in the 1930s, but also about Max, her only real love;  Giano her son, and the rest of her life.  This novel is inspired by the real-life ad lady Margaret Fishback who worked her magic for Maceys and did indeed get books of poetry published.

I loved her!  Lillian is my kind of gal.  And New York is my kind of town.  If you have visited New York, you should recognise some of the stuff within these pages.  If you have not, but are a film buff, or if you watch American TV programmes set in NY you will be familiar with street names and locations.  Even if you are not familiar with the Big Apple, you may like the story of a woman's entire grown up life, in less than 300 pages.  Alternate chapters tell her story in the present and the pass and I do enjoy that kind of writing.

My only gripe is with the UK cover.  What the hell is that?  The cover above is that of the copy I bought in North America - and today I found the one below on Amazon which certainly does not look like the character of the book title, considering that it was winter and she went out on the street wearing a full length mink coat, not a 3/4 length fabric -  but what do I know?  What I do know is that I like the US cover so much better than this one!!  But whatever the cover, please don't let it put you off, this is a wonderful read.

Phew!  Too Hot to bother?  The UK (and some of Europe too) has been in the grip of a heatwave.  Lucky me, I live in a 200+ year old stone built cottage. The walls are thick, so in the winter they help to keep out the cold, and now they are keeping some of that heat outside!  I am finding it difficult to settle to read anything over 100 pages just at the moment.

So I got to thinking about books I have loved in the past and tiny volumes came to mind.  Buddhism for Sheep is amongst the books I keep in my guest room, but you will see that I haven't emboldened this title as it is a five minute wonder - a stocking filler.

So another in the quick reads basket is this month's recommendation.   I have loved it, and I really want to recommend a real classic this month.  So here is

This is a kind of recorded oral history - fiction? perhaps, but probably based on someone the author came across.  Clem Putt is the the specialist.  And he builds..... well; just find a second hand copy, or have a look for a Kindle version (where hopefully the illustrations have been included, because it would be a shame not to see them) and find out what his specialism is.  Because you need to.  Really.  Enjoy July! 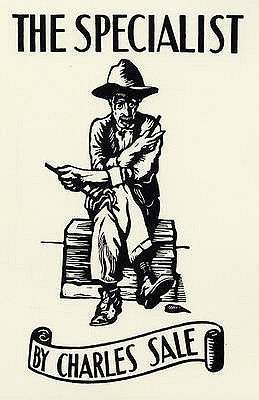