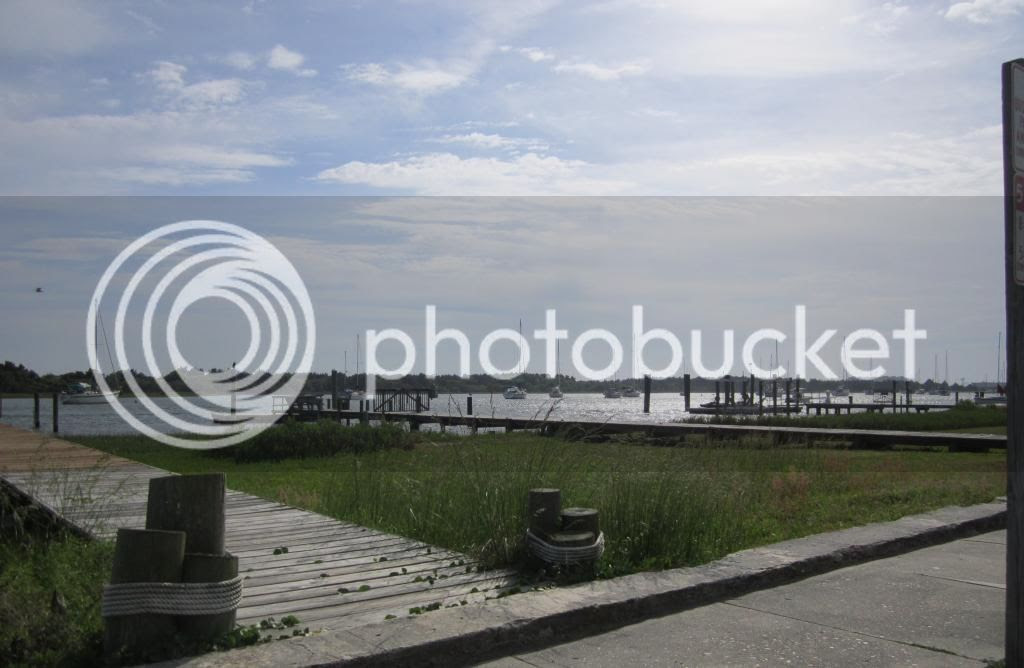 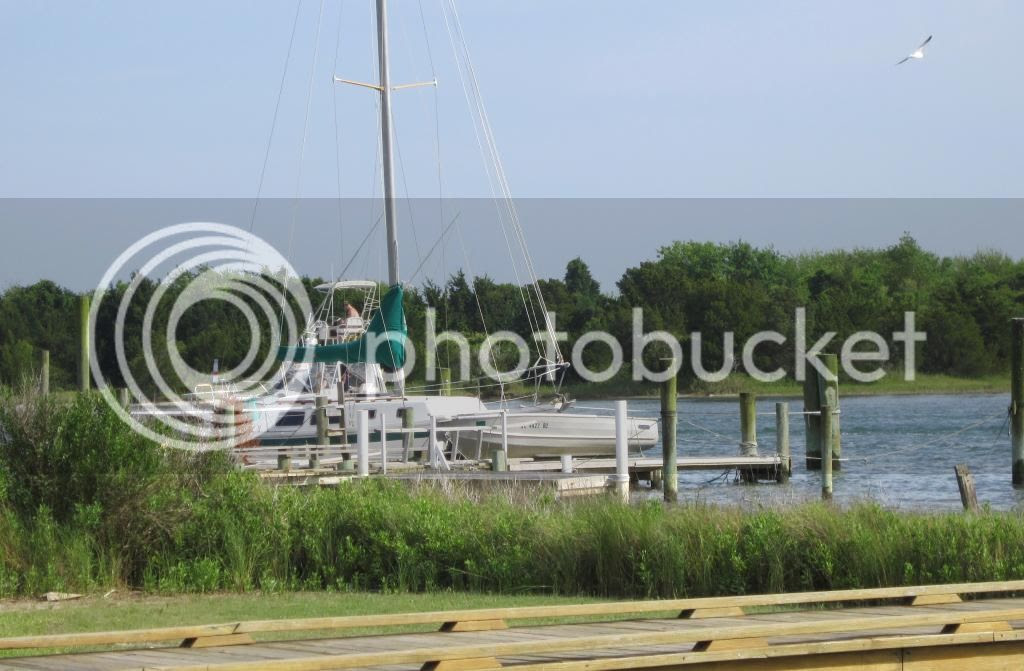 I'd forgotten that yesterday afternoon, we drove down to a coastal town called Beaumont, North Carolina.  (That's Bowmont.  South Carolina has a Beaumont too - but of course that's Bewmont!)  This is where Blackbeard the pirate hung out. It's just across the sound from the  Cape Lookout National Seashore.  Right at the very end of the Outer Banks is Cape Lookout.  Then, towards the top left is a little hook - which sort of disguises the access.  Between the mainland and this last bit of the Outer Banks is the Shackleford Banks, which lays across the entrance to Core Sound.

You can see from this picture that south of Cape Lookout the sea is shallower, and you'd need to know your way through the rocks here to sail round to the hook.  But once you did, you can also see, at the top of the picture, where the inlet to Core Sound is. It doesn't take much imagination to realise that the pirates had found a great hiding place, because if they knew the seas well, they could sail south up or down this part of the coast, nip round that little hook and into a safe harbour.  A British ship, chasing them down, would find that they had just disappeared.   There are dozens of wrecks off the Banks.  Wonder how many were sunk by Blackbeard? And I wonder if there are any Spanish Dubloons still to be found along the shores here?!   We had a late lunch at a small restaurant and bar right on the docks.  We watched people come along side on their little motor boats, get off, have a meal or a drink, and then get right back on and putter away to home or holiday house.  Great stuff!

Right.  Back to the next part of our trip but what's that noise?  Around this point in the trip my cell/mobile phone gives me a wolf whistle!  What is that?  That is a text from Hazel, around half way through our road trip, hoping that we are having a great trip.  Yes we are!  A little more about that phone.  It's a throwaway, cost $9.99 + a money card.  What a bargain, enough money to keep in touch with all the B and Bs and also to make emergency phones calls too.  Recharged in the car.  I had seen other people say that this was the way to do it and indeed it was.  Although, I must say, that we would have taken a lot longer to find out about one and set it up if it hadn't been for Jarleth, Hazel's OH.  He had taken us to a Target store whilst we were with them, and for fun, set it all up.  He'd never done this before on a throwaway - of course for business he must have a "proper" phone, so he rather enjoyed pressing the keys and saying "yes" and "no" to a computer.

We are off today to have a look at Myrtle Beach (I remember a song that starred this place), and so as it's a short drive will have a look at anything that takes our fancy.  It's Mother's Day in the US.  The world and his mother is out for lunch.  We pass huge restaurants, with queues outside, car parks full and large family groups wandering around.  We slow down at a little township called Calabash, the last stop before crossing the border into South Carolina.  I spot an icecream parlour but keep quiet - I am sure John would like something more substantial than that!  We turn off the highway and drive down to the water.  Several huge restaurants, all full, but there's a sign that says Coffee and Icecream right on the boardwalk by the water.  Closed.  Bugger.  We wander onto the boardwalk, admire the view and the boats, but a drink would be nice, and there is no way we are going to get into any of the restuarants here!  So, heading up to the main road again, I tell John that there is a an icecream parlour "just over there!".  We pull in at the car park, and even though it's hot and sunny, it's nearly empty.  They must all still be stuffing themselves with Mothers' Day lunches somewhere!  I try not to eat too much dairy because of the gallstones, so look for sorbet, and hey presto!, something lovely is available to me.  John opts for Vanilla with chololate chips, and we sit down in just the right seats to  be confronted with this, and I gasp!  It's a pianola!  In the US it's called a player piano.  You put in rolls of punctured paper and rather like a music box, the roll turns, and the keys of the piano move, and hey presto! music! 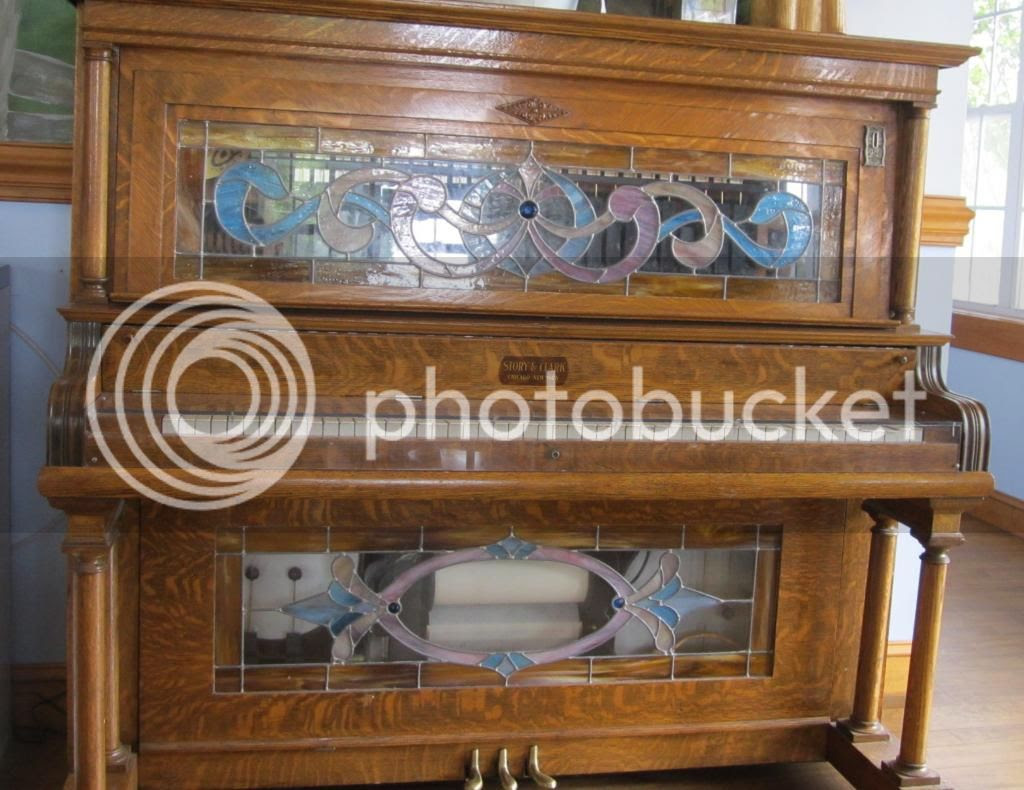 In this case, not only the keys moved, but inside the structure were several different kinds of drums and a very tinny xylophone.  Some whistley stuff too, but could not see what was making that. Anyway, only 25 cents a go.  We ask the (very young) staff if we can play it, as they are listening to the latest stuff on the radio, but they say yes so off we go.  First go, something vaguely recogniseable.  Second go, a crooner's favourite from the 1950s.  But then! oh my lord!  Elvis's "Can't Help Falling Love" followed by "Blue Suede Shoes", all played in rag-time on a pianola!  I am in heaven, and I am in love - and John was amused too!  What if we had not stopped for locally-made icecream here?