If ever there was a book I wanted to read but couldn't bring myself to start, it was this one.  I knew a little of the story, I knew it would be full of sadness, I knew it might even make me ashamed of the human race.  But you know, in the end, you need to take that book off the shelf and read it.  And what a brilliant read it turned out to be for me.  And it will stay with me - how could it not?

It does jump around in time.  It is a story told by several of the characters.  Some of the language is written in the vernacular.  Do not let any of that put you off,  for this is a book that will tell you as much about the lives of black slaves in the Southern states of America in the mid to late 18th century as a textbook.  And believe me, that is where the shame came into it -  for although I somehow could not believe how those blacks were treated I knew it to be true.  Much has been written about the slave trade.  I know how many people in the UK relied on it to live well (more than you think).  I know how many banks made a lot of money from it.  None of that is described in this brilliant book;   you will need to do a bit of research if you want to know more.

But this book is about a few men and women who had to live their lives owned by others.  Some kinder than others, some owners so cruel to be unbelieveable.  But it is, finally, a book that hopefully will make you see that hating people that are different from you, either in language, colour, belief does nothing for the human race, and that love is a multi-faceted thing.  I don't want to give too much of the story away, for you need to discover everything ab out Sethe and the people she loves page by page, thereby revealing the awfuls truths and the love within.

Sethe lived her early life at a farmstead owned by white people who appeared to be forward thinking. They treated their blacks well, they gave them decent living quarters, they spoke to them as though they were human beings and also as though they were not enslaved, the men were taught to shoot, and all in all that might have been a nice enough life if you didn't know any better.  But there is always darkness somewhere, and when the master dies, his brother the schoolteacher takes over. 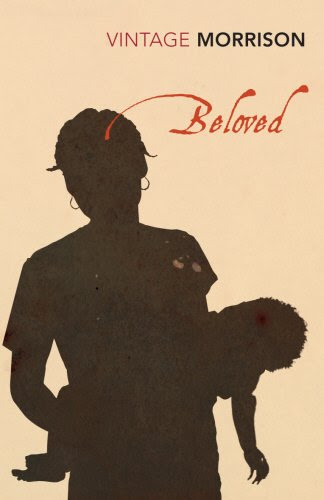 Planning to escape as a family, Sethe and her man and children are told about the underground railway, and make arrangements to flee.  She and the children arrive eventually at her mother-in-law's house, there to await her man.   And some years later, having lived through the death of her mother-in-law and the rejection of the family by the rest of the town's black population not least because the house is haunted -  a young black woman appears on the doorstep as if from nowhere.  Her name is Beloved .......