The People in the Photo - Helene Gestern 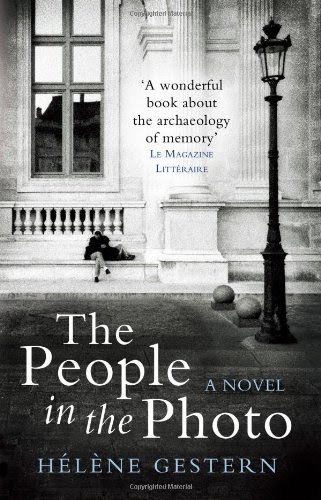 I loved this book.   It is the story of a hidden past, told by two desparate people, connected only by family histories but nevertheless connected by a feeling that they want to be together and know each other better, as well as finding out some truths about both their families.  Helene's stepmother is near death, and in a nursing home, now sufferingwith Altzeimers, she cannot be questioned about Helene's real mother, who died when she was a small child.  So an advertisement is placed in a couple of French newspapers, and a reply arrives.  The reply is from a man who has a copy of the same photo as Helene - her mother, his father, and another man.  He can tell Helene that this was a picture taken after a tennis tournament in the 1970s; he can tell her the name of the other man because he is his godfather.  And now they will set out to find out how her mother and his father came to be pictured together at all.

You could say that basically, this book is about a love story that gradually creeps up on you (and them), but it is so much more than that.  It is about the way that people love; the love parents have for children, the love that friends have for each other, the love that keeps secrets so that no-one is hurt - as well as love that causes strife and family problems.  Written in the form of letters, the style reminded me so much of the Griffin and Sabine books by Nick Bantock (although they are nothing at all like each other).  If you enjoy this style of writing, and you know that the past in a family can be different from the one shown to the world, that every family has a skeleton somewhere in the cupboard, you will enjoy the mystery of it.  It is brilliantly written, and for that we have to thank the book's translators (Emily Boyce and Ros Schwartz), who brought this to our attention from the French original.